“There are more pizzerias in Buenos Aires than in Naples and Rome combined.”
– Ernesto Sabato, Heroés y Tumbas

In his book “I’m a Stranger Here Myself” travel-writer Bill Bryson, in an attempt to defeat insomnia, describes making a lonely evening among the anodyne IKEA fittings of a Stockholm hotel even more excruciating by tallying the variety of surnames in the local telephone directory. In an exercise that was clearly not soporific enough, he counted more than 2,000 each of Eriksson, Svensson, Nilsson and Larsson — Swedish inventiveness evidently lying in self-assembly homewares rather than last names. I was reminded of this episode when in conversation with our hotelier in Buenos Aires a few years ago.

A member of Argentina’s large Sephardic Jewish population, he expressed surprise when my wife informed him that her last name was Italian. “When I saw it in the reservations list, and that you were coming from America, I was certain you would be… like this”, he said pulling at the corners of both eyes. “Like what?” she asked. “You know, Oriental. The last name, it sounds Japanese to me.”

Disarmed momentarily by this display of racism, my wife responded “You thought that was Japanese? You obviously don’t how to recognize Italian names, then.” This touched a raw nerve. Our host then proceeded to try to out-talk and out-Italian her. Few have dared try and even fewer have achieved either. 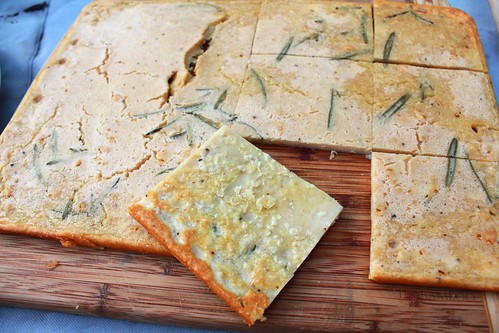 “Actually, more than 60% of Argentinians have Italian ancestry. Just look in the Buenos Aires phone book and you’ll see – Italian’s everywhere. I always wanted to tell an American this – when I was in New York, all I heard was how Italian it is, but the only ice-cream was Haagen-Dazs, and there was nowhere to buy fresh pasta. Here in Buenos Aires, every street you walk down is selling its own gelato in all different flavors, and you can buy tazzhariness on every corner.”

“Tazza-what?” she squinted. “Ha! You don’t even know tazzhariness, and you say you are Italian?!” he laughed mockingly. “When you have unpacked, walk to right out of the hotel and take the second street on the right. There you will find a little shop selling them.”

This was our first introduction to the slurring yeismo of the Porteño accent and the way it garbles double els (ll), sounding them as the ‘s’ in the English word measure. And it was only after we had stood, brows furrowed, at the window of said recommended alimento for some minutes – which for the record was closed every time we passed it during our week-long stay – that it dawned on us that our hotelier was referring to tallarines, a catch-all term for long noodles. We know now that the derivation is from tagliarini, a narrow long pasta native to Liguria, most often paired with pesto, but, most alluringly, with a walnut-cream sauce that might just make you lose your mind.

As we have previously noted, Ligurians, especially the Genovese, descended on Argentina literally by the million during the early years of the 20th century melding their unique brand of cuisine, their dialects and customs with the extant Rioplatense, with all manner of fascinating cultural effects. This occurred to such an extent that, in the same way that when Italian-Americans describe someone or something as “Italian” they’re referring to the red-sauce stained, gabagool-munching, and goomad-loving culture that derives from the assimilated dialects and culture of southern Italy transplanted to cities in the American north-east, Argentines associate much that is Genoese, and more broadly Ligurian, that arrived on Argentine shores in this period with the term Italian. And, are similarly, and sometimes amusingly, unaware that what they are calling Italian bears only scant resemblance to what most Italians would think of Italian. 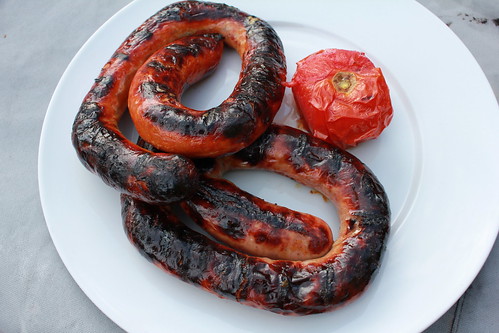 However, this isn’t uniformly the case in either country and cultural purists can still find native traditions living-on, largely unadulterated amid the cultural clutter of immigrant societies. Amongst these in Argentina is the time-honored Ligurian devotion to the chickpea, aka garbanzo, aka cecci. The poor soil and difficult terrain of Liguria make large plots of the wheat necessary for pasta production problematic, and so when they aren’t making their pasta from the ubiquitous chestnut, like much of the rest of the Mediterranean, Ligurians have for millennia, relied on the chick pea as a source of fibre, carbohydrate and protein.

Like the socca of Provence, the Ligurian farinata is basically a flat, unleavened bread made with chick pea flour, often seasoned with local herbs, garlic and salt, and with a slightly mealy consistency perfect for sopping up olive oil. In Genoa it’s typically eaten just as an alternative to wheat breads with a variety of toppings including soft cheeses, olives, raw vegetables, especially onions, and grilled or pickled fish. We found it right next to the torta di bietole in several Genoese bakeries.

Genoa has the distinction of being the only European city to be mentioned in Scheherazade’s The Arabian Nights, and its mazy labyrinth of alleys criss-crossing steep hillsides above its bustling port make for an appropriately confounding experience in which all you can see around you are even narrower lanes and a tiny skein of blue sky above squeezed between the jostling buildings and swooping, mendacious pigeons. With such physical characteristics, it’s no surprise that the Genoese dialect is similarly impenetrable, swallowing, as it does, both the middle and endings of many words, with a peculiar syncopated effect, so that what, in official Italian, is known as farinata becomes faína in Genoese mouths.

The Ligurian’s passion for the humble chickpea remained unabated in his new immigrant environs, but in crossing the Atlantic it got rather chucked-in with other Italian immigrant flotsam in an unusual way, as we witnessed at El Cuartito, one of Buenos Aires’ most traditional pizzerias. As we tucked into our own unique Argentine-style pizza and fugazetta, we marveled as two neighboring Porteños sporting heroic bellies carefully cut and covered their slices of pizza with a matching triangle wedge of faína before taking bites so gargantuan that they must have risked jaw dislocation. Known as pizza a caballo, or pizza on horseback, this heavy carb-on-carb action is common throughout Argentina and Uruguay, and, in effect, isn’t completely dissimilar to the New York technique of folding the slice in your hand to make a pizza sandwich. 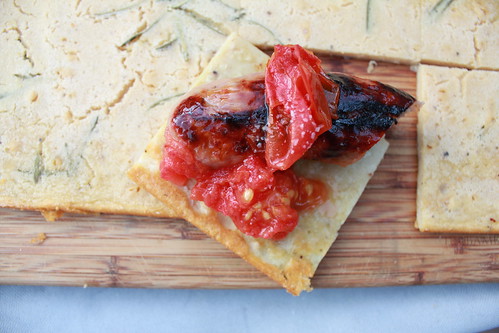 Our requested order of faína failed to appear that day, leading to no great disappointment, as we waddled around contentedly for the rest of day fully loaded with carbs anyway, but later that week we did happen upon packages of make-at-home faína flour in a Buenos Aires alimento (not the one with the tazzharines), and purchased a couple to bring home. Four years and two children later, and, I should point out, more than two years beyond the advice of the best before date stamp, we finally got around to making some faína this past weekend. Pairing it, not with pizza, but still appropriately — given the carnivorous context of our Argentina trip from which that pizza lunch was the sole vegetarian respite — with curls of Argentine chorizo and sweet Italian sausage and a squidge of burnt tomato as the first course of an immoderate, and frankly gluttonous end-of-summer asado.

It couldn’t have been easier or more delicious, and even had we found the package of faína flour to have been beyond the pail, we could quite easily have made it from scratch in the same amount of time. Indeed, apart from being reasonably careful with the water to flour ratio and lobbing in salt and a few sprigs of rosemary, it virtually made itself on the grill in a flat tray alongside the sausages, and in the same amount of time.

As with its more consonant-heavy cousin, farinata, faína is a perfect canvas for whatever you feel like painting on it. Personally, I wouldn’t descry it as topping for pizza until I’ve tried it, but there are a good deal many other tasty options I’d try first.

9 thoughts on “Either a Feast or a Faína”