Of all the miracles of modern science that we have witnessed over recent years, few have received as little attention as the 2009 announcement by the International Potato Center in Lima, Peru, that it had successfully sequenced the potato genome. It is a sad reflection on the state of our priorities as a species that this seminal discovery was overshadowed by other, flashier technological breakthroughs that year – including Apple’s launch of Siri, the utterly humorless, and mostly useless, personal assistant on the iPhone 3GS – because after rice, potatoes are the most important foodstuff on planet Earth.

To those dedicated souls through whose efforts the understanding that the potato genome contains 12 chromosomes and 860 million base pairs was added to the canon of human knowledge, and to food scientists around the world, this was a major event. Even bigger though, were the global festivities celebrating 2008 as the International Year of the Potato, spiritedly and perhaps, predictably, boostered by McCain Foods, purveyors of one-third of the french fries consumed globally. (Wait, what? You missed that too?) Nowhere was the potato’s anniversary celebrated quite so energetically as Peru where rather more than a degree of national pride rests on the belief that in their soil grew the origins of the first potato.

Indeed, both food historians and Incan mythologists trace the beginnings of potato agriculture in Peru back some 10,000 years to the shores of Lake Titicaca where, once the creator Viracocha had gotten through all the boring preliminaries of pulling the sun, moon and stars out of the lake, he listened to his rumbling tummy and sent his two sons to the human realm to teach potato husbandry to the newly-minted humans. Their teachings were heeded to such an extent that the 200 or so original wild potato varieties have been cloned into the nearly 5,000 currently planted in South America alone. Today, potatoes are grown on an estimated 192,000 sq km, or 74,000 square miles, of farmland across the globe and entire national cuisines, like those of Ireland and the Ukraine, are devoted to the humble spud. Truly the legacy of a benevolent almighty that even the most cold-hearted atheist might appreciate.

Our personal history with Peruvian potatoes stretches back only a decade to when we were introduced to the subtle pleasures of the Peruvian table at Brooklyn restaurant Coco Roco. The 15 block walk lent virtue to our gorging on their signature rotisserie chicken and over-generous sides of papas a la huancaina. Shortly thereafter, our first attempt at cooking anything Peruvian was influenced by their delicious take on the crunchy, briny pulpo al olivo, octopus in olive sauce. In fact, it might not be too much to suggest that both Coco Roco and our success with that seafood dish were our gateway into the culinary diversity of that Borough, having a profound impact on our tastebuds, and sparking the enthusiasm to try a ton of places that we might otherwise have walked past. 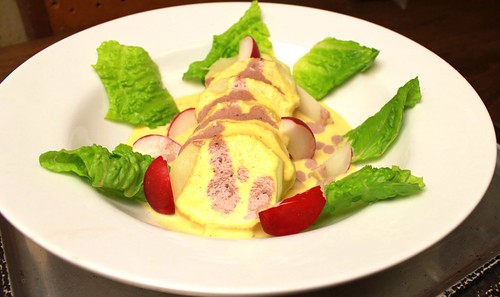 Anyone who has followed us for more than a year or so will notice that we periodically run low on inspiration, and return to what we think of as our “roots” and go through a period, sometimes longer, sometimes shorter, of making dishes that we loved as kids, or when we first met or just that remind us of those simpler, halcyon days before we had a pair of kids, pressure at work, a mortgage, and before everyone and their mother had a food blog. After a long and tiring summer of work and little play, we again found ourselves in need of the emotional succor of these nostalgic dishes.

We had been meaning to cook Peruvian for some time — ever since our final dinner in our former Brooklyn stomping ground one warm evening two summers ago, when we ate some incredibly delicious, modern takes on traditional Peruano dishes at Miguel Aguilar’s Surfish. Incredible, tender and garlicky grilled beef heart skewers (anticuchos), a shrimp soup (chupe de camarones) so good that a reverential silence seemed to descend on the entire restaurant after the first spoonful, and a tart mussel ceviche (choritos)that so elevated the humble bivalve you wondered why you would bother with any other shellfish again. But it wasn’t until we were poking around the shops one rainy Saturday last month before our monthly date – at the wonderful Serpico – and spied Martin Morales’ magnificent and super-looking new cookbook from his highly-rated London restaurant Ceviche that we decided to turn intentions into actions. 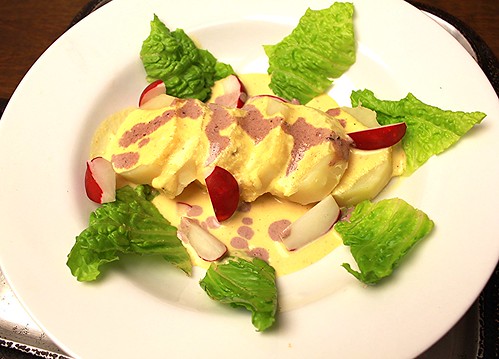 Both the dishes we made that night – the octopus (see next week’s post) and these potatoes – are at the heart of Peruvian cuisine, representing the two faces of the country, respectively, the Andean and Pacific, and neither are any more complicated to make than being able to boil water and operate a blender under minimal supervision. Finding the Peruvian yellow pepper paste could be a mite tricky depending on where you live and the quality of your grocery store, but the good judgment you demonstrated in visiting weareneverfull.com, can surely be parlayed into finding some aji amarillo on these here interwebs.

Since you’re by now regretting your infatuation with Steve Jobs’ handiwork at the expense of the fascinating, multi-faceted and altogether more vital potato those six years ago, you should seek immediate consolation in an immoderate serving of the peculiar creamy spiciness of papas a la huancaina. It won’t have the gravitas of the McCain Foods-sponsored world’s largest french fry cook-off or the gripping excitement of the “who can peel a pound of spuds the fastest” contest I once entered as a teenager, but it will connect you to 10,000 years of potato history, and potentially, to the omnipotent deity we have to thank for the tuber’s existence.

For the Huancaína sauce:

15 thoughts on “Papas a la Huancaina: The Humble Potato Bids for Immortality”