The longer we live, the more we understand that our lives, especially now that we have two children, are about compromises. These are often in the form of compromising what we want to do, more or less completely, because our children are either unwilling or unable to do it. Recently though, a new kind of compromise hoved into view after 10 days of excessive eating and drinking while we hosted family from the west coast: namely, that we needed to compromise our caloric intake in order to fit into our clothes.

So, after making a pact to foreswear wine, beer and meat for as long as it takes until we feel less disgusting, we stopped at one of south Jersey’s myriad farm stands and collected what appeared to be a month’s worth of fresh fruits and vegetables. The summer’s bounty in this part of the world is at its peak now through late-September with extraordinary corn, peaches, nectarines, black berries and peppers leaping from the ground and, so it feels, throwing themselves into ones shopping basket. Indeed, so bountiful is the produce that most farm stands sell off yesterday’s unsold items at deep discounts, enabling us to pick-up several pounds of meaty yellow tomatoes, a bushel of Italian frying peppers and a dozen nectarines for less than $5. 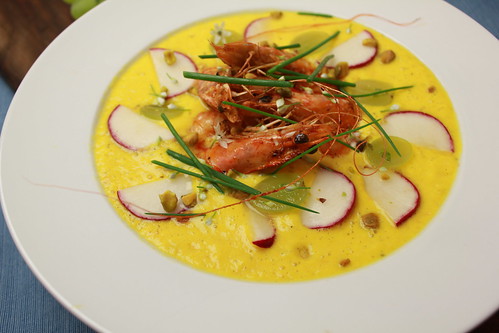 Of course, now that we had all this over-ripe plenty, we had to do something with it, and sharpish, lest it go to waste. Happily, our son Paolo is fast becoming a fruit bat and snaffled most of the nectarines before we’d even got home that day, but the tomatoes weren’t so easily taken care of. Too lumpish and unattractive for salads but still too good for cooking, we were in something of a quandary until we noticed a yellow gazpacho on Matyson BOB’s Instagram feed.

We’ve mentioned before that once-upon-a-time recognition from professionals via Instagram has been among the very highest points of our blogging lives, and a retweet by Matyson the day after we celebrated our anniversary dinner there in late July filled us with blushing pride too. And, not that we are seeking further professional approval in publishing this here post and social media-ing it as widely as possible, though we would no doubt be chuffed to bits were that to occur, but the timeliness of that inspiration cannot be understated.

Paired with wonderful sweet, head-on shrimp from a local Asian grocery, crushed pistachios, garlic chive flowers from our garden and halved grapes, the finished dish was somewhere between gazpacho, ajo blanco and seasonal nirvana. It was only while watching a news item this morning featuring Dan Barber of Blue Hills at Stone Barns-fame, in which he was describing his biodynamic farming practices, that we learned that tomatoes are the “Hummers of the vegetable world”, pulling nutrients out the earth faster than almost any other crop aside of wheat and corn. It was a useful, if slightly boring, reminder that even as we compromise our choices for the sake of our waistlines, there are other compromises that we are unwittingly making.