In 1994, and after six playfully-humorous seasons of barbershop-based banter, fans of British-Caribbean sitcom “Desmond’s” were disappointed when the show was discontinued. This blow may have been softened when they learned that it was to be succeeded by spin-off show “Porkpie”, but, after two fairly insipid seasons, this too was consigned to the bin of history, in part, because it relied on the exact same jokes as its predecessor. Never a regular watcher of Desmond’s, I was still sufficiently aware of it to be familiar with at least one of the leading characters.

Porkpie, played by Guyana-born actor and musician “Ram” John Holder, led the supporting cast in Desmond’s as a part of the furniture at the barbershop, always ready with a pithy remark or grumpy wisdom. Nicknamed for his habit of sporting a squarish leather fedora, known as a pork pie hat due to its resemblance to a kind of thick-crusted meat pie, Porkpie was a retired Ford employee turned-lollipop man from Peckham, south London. Porkpie’s eponymous show began with him borrowing a quid off his nephew to buy what turned out to be a winning lottery ticket. So that his nephew could not lay claim to his new fortune, Porkpie was careful to repay the loan before announcing his win. A series of spurious capers and intrigues around Porkpie’s experiences as a newly-minted millionaire followed, most of which centered on him trying to hang on to his money while his nearest and dearest, together with unscrupulous characters from his past, including an ex-wife who immigrates from Jamaica after reading of his good fortune in the West Indian Times, are determined to wrest it from him one way or another.

It is this show, then, that I can’t help bring to mind every time I think of the actual dish of pork pie – a Boxing Day favorite in my house growing up. And because of that, it is always feigning a (terrible) West Indian accent that I utter the words “pork pie”. However, as far as I know, at no point during the combined eight seasons of Desmond’s and Porkpie was an actual pork pie seen on camera. This might not be surprising since the pork pie is not a Caribbean dish nor is it from London, but for British food fans and those among us who prefer our humor painfully obvious it was a pity. 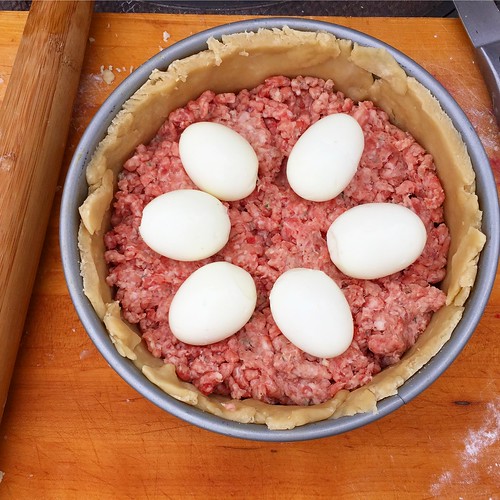 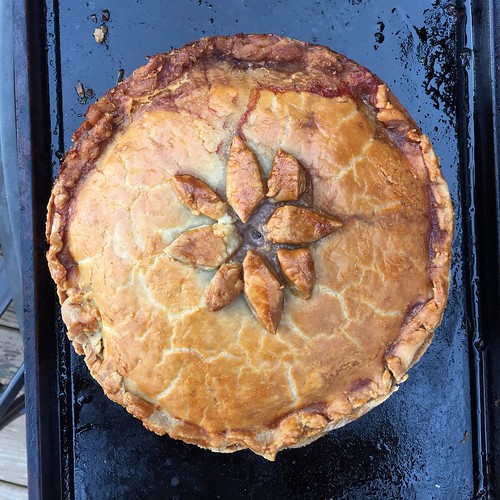 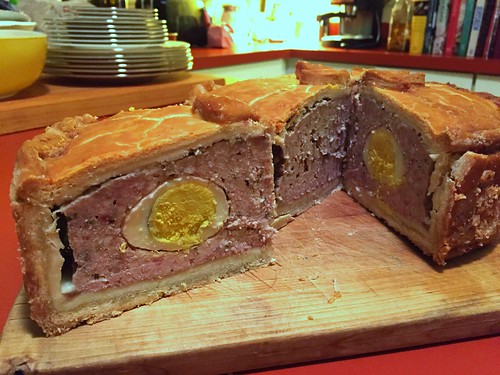 In basic terms, pork pie is a circular confection of fresh and preserved minced pork, flavored subtly with thyme, sage, nutmeg, cloves and white pepper, and wrapped in aspic and hot water pastry. Once baked it has the consistency of an old brick – stiff, brown and slightly crumbly on the outside, but pinker, dense and heavy in the center. It’s unrepentantly traditional and old-fashioned. The pastry requires pork lard and the filling combines three different kinds of pork meat. It’s food for the agricultural laborer that has not, and in many ways, cannot be modernized without fundamentally changing it.

Thankfully, modern is not a word frequently associated with pork pies. Hailing from the gastronomic triangle between Nottingham, Lincoln and Leicester from which the world-class – and traditionally-made – cheeses stilton and red leicester also originate, pork pies from the market town of Melton Mowbray are still being made in the centuries-old way. So much so, that they were recently the recipients of a Protected Geographical Indication by the European Union. Under this designation only pies using the “hand-raised” technique that produces the hard, crumbly crust can be officially-titled Melton Mowbray pork pies.

One might mistake pork pie for its continental cousin of paté en crôute and there certainly are similarities, both in the sense that they are slightly intimidating and time-consuming to prepare and have curiously pink centers, even after baking. I’d also consider pork pie a sort of preserved meat, as I would paté, in part because they are robed in aspic, but the similarity is really that they inhabit the same culinary niche – that of the slightly-elevated rib-sticker that’s best served cool with vinegary condiments and crunchy salads.

In my family, it was ubiquitous on the Boxing Day table, alongside cold-cuts and other side dishes from the previous day’s roast, Branston pickle, and salad cream. Not exactly an antidote to heavy Yuletide fare, but a change in temperature, at least. My favorite way of serving it – even today – is to bathe a fat slab of pork pie with hot brown gravy so that the pastry starts to soften, but the center is still cool, though I’m prepared to accept that not everyone will find that combination so toothsome.

Pork pie is also commonly taken alongside a limp salad during what we British jokingly refer to as the summer – those months from June-August when the rain is slightly warmer. It’s because of its reassuring nature that I consider pork pie among my favorite British dishes, and I can’t help but think that the show “Porkpie” might have stood an improved chance of renewal for season 3 had the set-managers taken it upon themselves to scatter said pies – personal or family-sized – in various scenes. It certainly wouldn’t have made for cornier gags than those they were already using.

For the hot-water pastry: