“The pen is the tongue of the mind.”
– Don Quixote de La Mancha

I have been told that the Inuit have more than 30 words for snow and a similar number of descriptors for the myriad tones of white, blue and grey that color their environment. If desert-dwelling Arabs had a similarly nuanced vocabulary for gradations of sand, then it might follow that their moniker for the vast expanses of central Spain, al-mansha, would speak of the manifold and subtle variations between fawn, leather and olive that are that province’s signature. 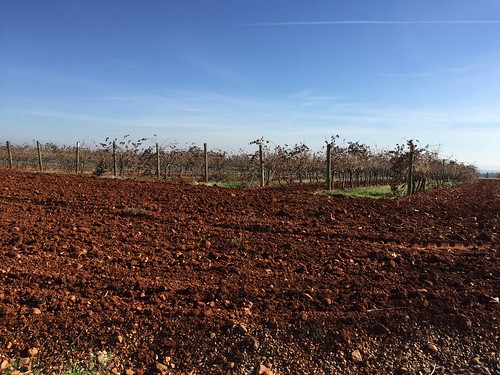 The real meaning, dry land, or land without water, is certainly descriptive of this harsh, arid region, but does little to capture the nuance and expressiveness of a territory that tricks the unfamiliar eye into seeing only a boundless expanse of brown, unbroken in waves to the horizon. Its apparent monotony underlined by parallel rows of crocodile-skinned olives and low bush vines punctuated occasionally by the tapered form of a cypress. Only after letting ones gaze un-focus does this trompe d’oeil reveal an exquisite palette of variety for which, I, at least, have no words.

However, few are the eyes completely unfamiliar with La Mancha. It is not the tourist’s choice – seldom do they venture beyond the blazing coastal strip to the scabrous beauty of the interior – but it remains the classic Spanish vista. Even those who have never seen it could describe it from the pen of Cervantes (or the cover of his novel). When we close our eyes, we can see the spare shadow of his hero, lance in hand, astride Rocinante, beside his rounder, donkey-mounted companion, cast upon the lumpy terra-cotta and withered grasses of La Mancha while the cyclopean gaze of whitewashed windmills confronts the pair from a distant bluff. 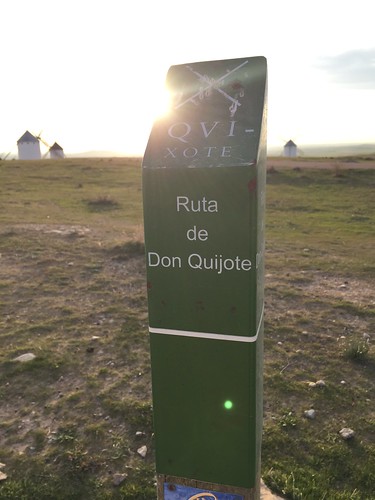 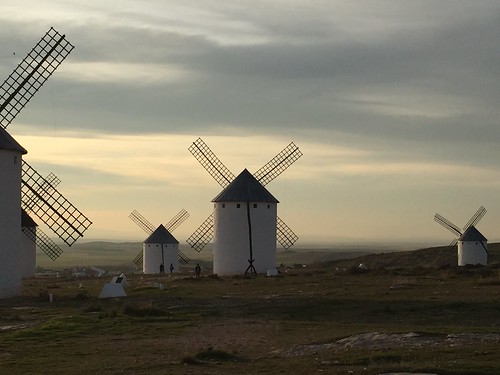 Traveling through this territory, it is impossible not to see what Cervantes saw. It is not just the ardor with which the myriad statues of the knight and his page try to convince you of their authenticity, it is also the chimeras of the two that seem to appear. A squint against the sun or a half-glance out of the car window might reveal Quixote and Panza hiding in plain sight, sauntering down a dusty track, framed by the immense landscape. Near the hamlet of El Robledo, we passed a shepherd bringing his flock in for the night, and in his pinched and craggy features, I swore I saw, if not Quixote, then Cervantes himself, right down to the angular beard. In truth, we saw rather more Sanchos than Quixotes, perhaps a testament to La Mancha’s hearty cuisine that so occupied their conversations and dreams.

Food in these parts remains largely medieval, though sadly, the duelos y quebrantes of the Don are now commonly served sans brains, as a delicious, but tamer, version of scrambled eggs and bacon. Nonetheless, the cuisine of La Mancha is still designed to serve the peasant stomach and stick to his ribs. Beans, sheep’s cheese, pork and bread are the mainstays and served generously, supplemented when possible by game, and complemented at all times with heavy, sun-soaked wines that stain the lips and the shirt-front.

Unlike Cervantes’ duo, we rarely miss a meal, but one day on our recent trip we somehow managed to forget to have lunch. It is, therefore, to our credit, that we bore the torment of the vineyard tour and guided tasting that took its place with great fortitude, but on the subsequent drive towards Almagro, our mettle gave out. It was only after a few miles of immoderate gnawing at a two-euro morcilla and a long loaf grabbed at a gas station in La Puebla de Montalban that we were able to muster any appreciation at all for the majestic and lonely beauty of the Parque Nacional de Cabañeros. 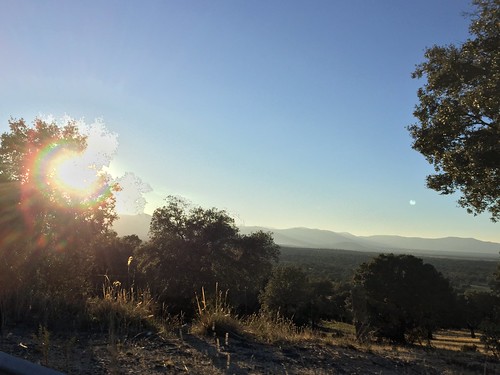 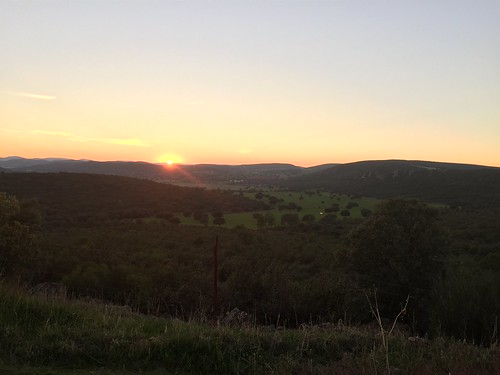 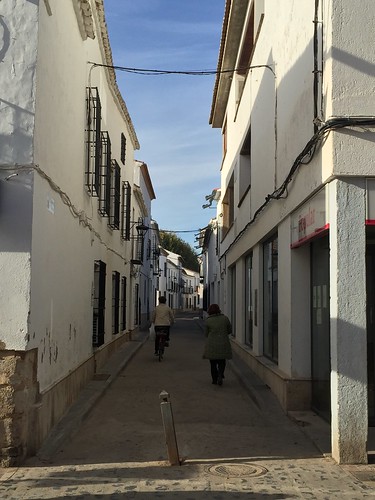 That evening, exploring the crooked streets of Almagro – a true Spanish wonder of white-washed buildings amid fields of brown earth and yellow wheat stubble – we let our urgent appetites lead us to La Tabernilla de Almagro. At a table that the waitress proudly dressed for us with two large napkins, and under some of the brightest lights this side of an interrogation room, we enjoyed one of the simplest, but most remarkable meals, comprised entirely of local dishes.

In keeping with traditional Spanish hospitality, a tapa of surprisingly spicy beans came first alongside our wine, an inky tempranillo-syrah blend from nearby Valdepeñas. It tingled pleasantly and cleared our palates for a racion of the most sublime jamon iberico de Jabugo that followed. The short, rectangular slices lovingly laid-out like a pink and white quilt, as if to compensate for the absent checkered tablecloth. 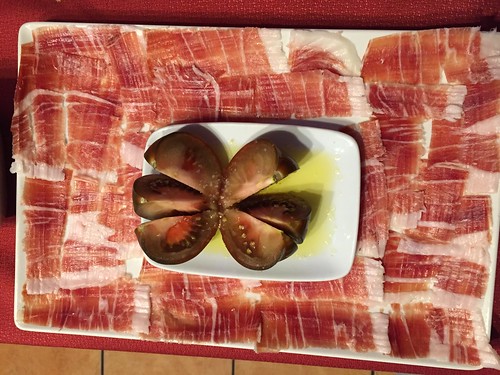 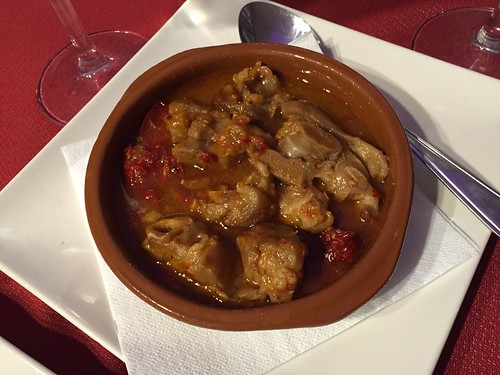 Then came a wide ramekin of manitas, chopped-up pigs’ feet in a sweet, almost floral, sauce of garlic and ñora peppers that was sticky with collagen and lip-smackingly good. Our noisy gluttony attracting a nod of approval from the proprietor, whose belt appeared to be about to lose its tug-of-war with his impressive gut.

Alongside the manitas came, if it’s possible to say so, came an even humbler dish: migas – stale bread, soaked in milk then sautéed with bacon, chorizo and dried, sweet peppers and dressed with the endemic Airen variety of white grapes. It is perhaps the quintessential dish of central Spain – a kind of Spanish bubble and squeak, if you will – in which ingredient ratios and additions differ depending on the region and what is to hand. Some regional variations, especially those from Extremadura, include pinches of pimentón and/or cumin, some also add cubes of jamón. That there exist New World versions of migas is testament not just to how generous and rewarding a dish it is, but to the fact that many of the Spaniards who sailed west to the Americas hailed from these impoverished provinces.

Leaving La Tabernilla later that night, we strolled through Almagro’s unique Plaza Mayor under starry skies. At one end of the colonnaded oval sits local son, Don Diego de Almagro, conqueror of Chile, astride his charger, chin set and eyes fixed on the horizon in solid bronze. At the other, a thin beaten copper effigy of Quixote and Panza. The first, protected from grasping fingers by its shin-height iron fence, emphasizes the vaingloriousness of that age of exploration. The other, creaking flimsily in the light breeze, seemed to embody the ephemeral and the absurd. And though Don Diego’s exploits are remembered also in the shrine that pairs the Spanish and Chilean flags in Almagro’s charming Iglesia de la Madre de Dios, it is the imaginary romantic, the preposterous Quixote, that the world took to its heart. 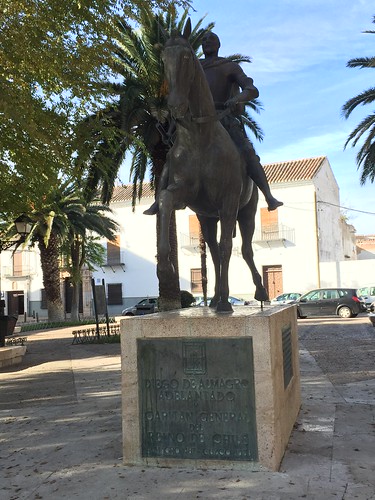 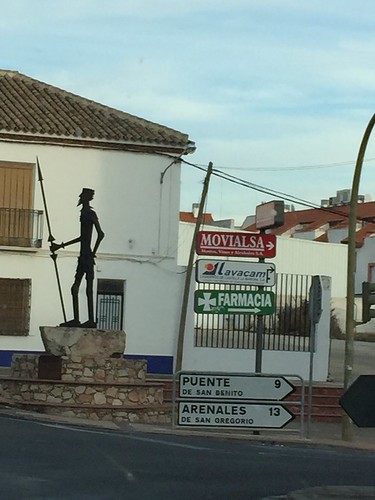 That the anti-hero, with his naïvety and childish gestures, his preoccupation with his stomach, should be preferred to the dauntless explorer of new lands and ferocious slayer of Indians somehow speaks to what humanity truly appreciates. We might fear, even respect, the all-conquering über-man but we cannot love him. Instead, we delight in the good-hearted blunderer who managed to usher Almagro’s greatest son into obscurity even in his hometown, because, ultimately, as Nabokov wrote, he is in all of us.

As we turned down Calle Carrascos towards our hotel, we found Quixote’s spirit still alive and well in Castilla-La Mancha: a small girl jumped up and down reaching her hands towards the heavens. “What are you doing, sweetie?” her mother asked. “Trying to grab the moon, mama!”