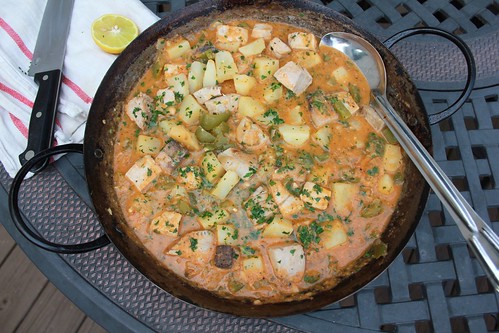 When the coughing and farting of the antique truck had rumbled away, between the rustlings of birds pecking grubs among the dry plane leaves, you could just make out the pop and thwack of rubber on concrete. Ascending a double flight of unusually steep stairs, past a stained glass window featuring farming folk, the squeak of gym shoes and the grunts of the players become audible. At the top, a cry of “Buen remate, cabrón!/Good shot, motherf—er!” greeted us as we emerged into a small, tiered seating area perched some twenty feet above an enclosed court. On wooden benches, polished to a veneer by generations of spectator buttocks, a handful of thickset older men, sipping beakers of black wine, like Statler and Waldorf from The Muppets, were joyfully goading the four sweaty men haring after a small rubber ball below them. 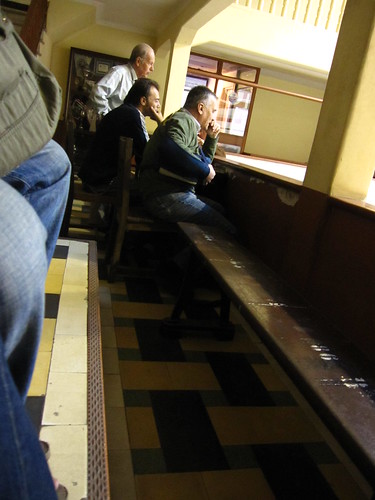 The oak-paneled bar area to our left was bedecked with green and red flags and football scarves, and populated only by an unshaven barman polishing glasses absently with his shirt-tail. Feeling rather conspicuous, we perched on the edge of a bench and peeked over the parapet and immediately recognized the game. Anyone who has spent any time in New York City has seen kids and adults alike playing “handball” in courts in municipal parks. Usually played 1-vs-1, a flat rubber ball is hit with the palm of the hand against a wall with roughly the same purpose and rules as squash. Here the players were paired in teams and like in New York were wearing gloves or had applied tape to their palms as padding. However, unlike our corner park in Brooklyn, this court was at least fifty yards long surrounded on four sides by high walls giving it the peculiar gladiatorial aspect of a pit. 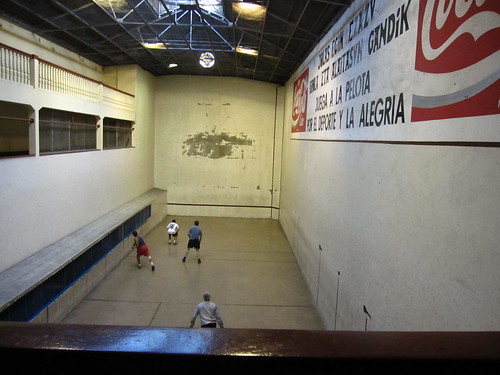 Properly-named, the court is the frontón and pelota – ball – as it’s simply referred to, is the game. Playing and watching were members of Montevideo, Uruguay’s, lively Basque community, in this, their community center, Euskal Erria, the Basque institution. After a short while, the players tired and finished their game, and the spectators strolled off back down the stairs. Pelota is the signature sport of the Basques and its familiarity to North Americans has a lot to do with Basque emigration to the New World and Basque clubs like this one scattered around North and South America.

Basques from both the French and Spanish sides of the Pyrenees have been arriving in the New World ever since it was discovered, but their emigration accelerated towards the end of the 19th century as shortages of land and a series of poor harvests drove many French Basques to seek their fortunes in South America. Usually on the wrong side of history, most Spanish Basques chose the Republican cause in the Spanish Civil War and once again found themselves singled out for special persecution as Franco’s fascists got the upper hand. Fearing for their lives, but anticipating that their exile would be temporary, hundreds of thousands of Basques landed in the Americas during the 1930s. The vast majority went to the Southern Cone of South America – to Argentina, Chile and Uruguay – though many chose Venezuela and Puerto Rico, as well as the western US where even today they form the majority of America’s shepherds. 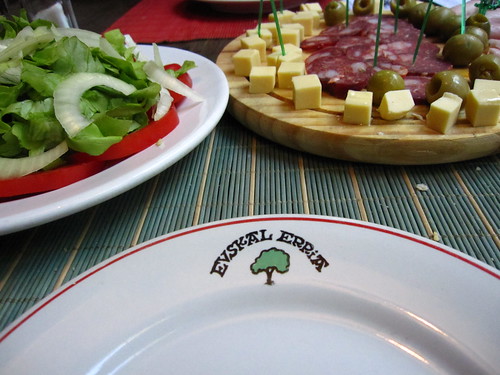 Retiring to the oaky comforts of the bar that lunchtime in Montevideo, and disturbing the otherwise somnolent barman, we sat by a sunny window overlooking the turning leaves of the plane trees below us and refreshed ourselves with a large jug of pink wine. Picking through a plate of fiambres y quesos Uruguayos with some excellent salami and some curiously yellow cubes of cheese we remarked on the European-style plates embossed with the club’s name and crest, an oak tree. Next came a very disappointing and similarly yellow paella decorated with some giant head-on shrimp and a few over-sized chunks of raw carrot. It was our only departure from meat in Uruguay but was enough to encourage us to remain carnivorous for the remainder of our stay. Basque immigrants to Uruguay, you see, typically either worked the land or in business, unlike their compatriots in the homeland where fishing remains an important part of the economy. Consequently, it appears that aspect of Basque culture that has been lost among their Uruguayan descendants. 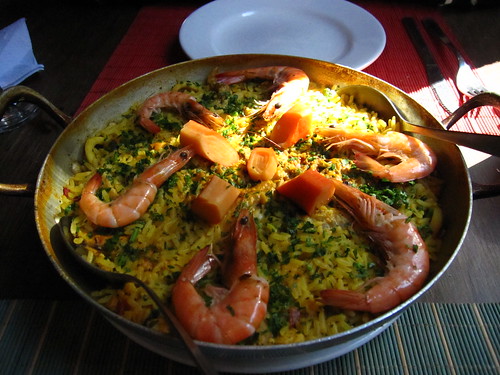 The legacy of persecution has made the Basque passionate about retaining his culture, traditions and language, and clubs like this one in Montevideo sprang up wherever Basques settled. Euskal Erria, founded in 1912, was the second such club to be founded in the Uruguayan capital when members of the first, Centro Euskaro, disagreed over who to favor in the Carlist Wars. That the two have never reconciled speaks to what many would perceive as the stubbornness typical of the Basque temperament. Indeed, the common perception of Basques in Europe formed by reports of the terrorism of para-military separatist group ETA, is quite different from the prevailing view in South America where Basques are typically considered more honest, tougher, harder-working, and richer than the average. Former President of Chile Patricio Aylwin whose Welsh surname belies his Basque ancestry, once claimed that “the two greatest accomplishments of the Basques are the Republic of Chile and the Jesuits.”

A few years earlier, during a journey through the French and Spanish Basque lands, we visited the Sanctuary of Saint Ignatius Loyola, founder of the Jesuits, in Azpeitia, Gipuzkoa, and witnessed first-hand the reverence for the Basque Country’s most renowned son in all its Churrigueresque splendor. Later that day, having made it to the coast, we enjoyed the kind of seafood lunch for which Basque cuisine is rightly famous. For €9, at a tiny oak-clad cantina in the village of Zumaia, a carafe of the slightly carbonated local white wine known as txakolí washed down a feast of grilled sardines and the classic Basque tuna (bonito) and potato soup/stew, marmitako. 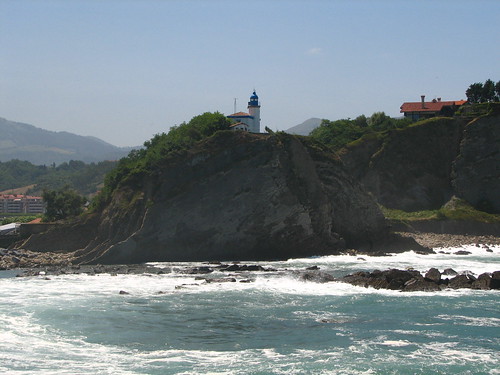 It was coming up on 10 years since that lunch and so it seemed timely to revisit it. Nothing could be simpler or more straightforward. Using the paella pan that we bought at a street market in Montevideo – hand-hammered by a certain M. Giannichini – it was the perfect vessel for marmitako. Wide enough to saute, tall enough at the sides to accommodate the liquid. It is also a perfect articulation of the half-Spanish and half-Italian Uruguayan identity of which we were just about to learn that Basque is an important third leg.

10 thoughts on “Euskal Erria: A Basque Institution Far From the Pyrenees”