As an icebreaker at the beginning of the birthing classes we took in preparation for the arrival of our first-born, participants were divided into male and female groups and invited to sit together and discuss their greatest hopes and apprehensions for impending parenthood. The biggest concern of our fellow soon-to-be-parents turned out to be making sure their birth plan was followed to the letter and that on no account should their spouse be somehow duped into accepting analgesics against her wishes by velvet-tongued medical professionals offering relief from the agony. We were surprised to be the only ones looking beyond the birth and confessing their concerns about actually raising said child.

Now that we have been parents for some years, the reality of raising said child, is well, very real, and while those concerns remain, they’re subsumed by the every day requirements of parenthood. Among them, the quotidien hassles of dressing, feeding and entertaining, but also matters requiring rather more nuance, like, just as prior to the birth of our second, explaining to a three year-old where the hell babies come from.

At the time, I considered peddling the age-old yarn of benevolent storks, but decided against it because it would require an explanation of what a stork is, since they aren’t commonly seen in the suburbs of Philadelphia, especially in unseasonably chilly Decembers. Instead I hemmed and hawed my way around the topic, saying that babies sort of come from their mommy’s tummies which open to let the baby out when it’s ready to be born, and felt quite relieved to have avoided anything more akin to biology class. 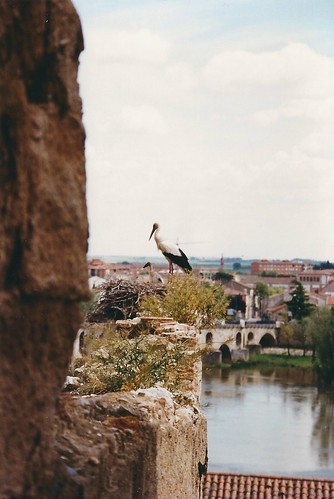 That is, until recently, when I read that Aristotle supposed that when the storks flew south from Greece for the forests of Central Africa at the onset of winter, they were heading off to recommence an age-old war with bow-and-arrow-wielding Pygmies who harried them from the backs of specially-trained attack goats. Had I known of this at the time, I could have woven a terrific tale for my son of daring Lilliputian combat against fierce, Brobdingnagian birds, perfect for the imaginations of young boys. Admittedly, it might not have provided a very convincing narrative about the arrival of children, but as a fable about the secret lives of very placid-looking storks it would have made for truly gripping stuff.

I had never seen a stork in the flesh until I came face to face with a mother and her juvenile a few years ago in central Spain. [I would use the word chick for the young stork, but at about two feet tall with some serious beakage, it hardly seems appropriate.] I was wandering around the small Castilian city of Zamora on a surprisingly hot day in early May appreciating many of its magnificent collection of Romanesque churches and waiting for a restaurant to open for lunch. Turning off one of the many deserted streets into a narrow alley, I almost bumped into this skinny-legged pair as they were tottering gently along side-by-side like an elderly couple out for a stroll. Sensing my presence they gave me a casual glance over their shoulders, and hopped onto a low, guano-encrusted parapet on the city wall, and stalked storkily to their giant nest overlooking the curve of the Duero river that is called Douro just over the horizon in Portugal. Around another corner, I spotted the bell-tower of San Isidoro crowned on all points by giant nests, perhaps like the headdress of a pygmy emperor. 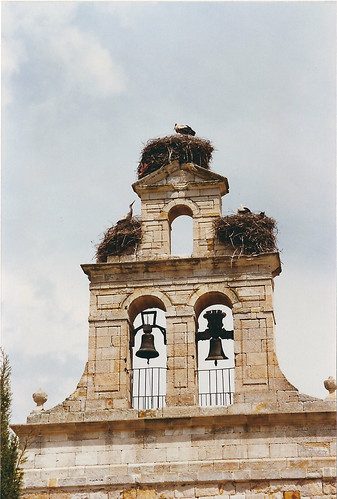 Over a substantial lunch of a rabbit and almond stew perfumed heavily with garlic and cumin and a ceramic jug of black wine in the one place that eventually opened, I briefly pondered the migratory lives, mythic and real, of these charismatic, bean-pole birds. The Spanish consider it propitious for a family of storks to return annually to nest on one’s house, a belief that is shared throughout the stork’s summering range in continental Europe. Indeed, many homeowners actively work to promote the attractiveness of their roofs to visiting storks. In southern Poland years earlier, I recalled seeing some nests so vast that the roofs of the buildings appeared to be thatched, not tiled, having been augmented for stork-comfort by the home-owner’s hands.

I never learned whether the presence of the storks on one’s roof was thought to bequeath increased fertility upon those sheltering under it, but, apart from the visual and sanitary inconvenience caused by their copious droppings, their imperturbable demeanor and awkward, but amiable, appearance can’t fail to contribute to domestic tranquility. As I rose from my table about to leave the restaurant, I caught the eye of a thin old boy sitting close by who was rinsing the dregs of his cafecito cup with a dram of orujo. Nodding towards the window, and the stork nests visible through it, he waved and said “Que Dios bendiga su casa familial con una cigüeña!/May God send the blessing of a stork to your home!” 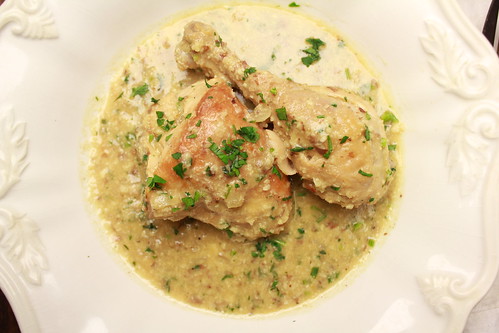 I thanked him and walked back out into the sunlight, not entirely sure whether his benediction meant that he hoped a stork would come and live on my roof or that a stork would bring me a baby. Either way, it seemed appropriate recently, around Emiliana’s first birthday, to recreate the stew from that day and thank the storks who brought she and Paolo to us. If only they’d come back and baby-sit now and again…

[Recipe adapted from one found in an old issue of El Gourmet magazine, courtesy of our friend Nuría.]

18 thoughts on “Storks, Pollo al Andaluz and the Facts of Life”