For much of what we are accustomed to seeing around Christmas, the candles, trees, the mistletoe, the decorations, and many of the songs, we need to thank the Germans. Not specifically those residents of the modern nation state of Germany, but the historic Germanic-speaking peoples of central Europe, for whom the birth of our Lord and Savior was a thinly-veiled opportunity to get out there into the frosty air, bedeck conifers with a variety of junk, quaff heavily-spiced glühwein, and bellow carols in to the night in return for sweetmeats. I would wager that among the English-speaking peoples, certainly the British, the willingness to credit to our Franconian-speaking brethren for these festive trappings is reluctant at best, primarily for, you know, historical reasons.

Those of you who follow international soccer tournaments, may also know that we have the oh-so-crazy Germans to thank for Paul the Psychic Octopus, whose soothsaying powers at foretelling the outcome of key clashes were demonstrated with an 85% accuracy rate throughout the 2010 World Cup. I count myself among the gamblers who were disappointed that Paul passed into the great mystery that surrounds us prior to this year’s competition.

It’s perhaps no surprise then to learn that the Germanic penchant for invertebrate oracles should have been combined with the already Deutsch-tinged Christmas celebrations in Britain’s latest campy attempt to find the most ludicrous and tabloid-friendly ways of amplifying the pre-Yuletide excitement. For this December, Manchester Sea Life Centre’s very own Miranda the Octopus is counting down the days to the happy birthday Jesus party with her very own Lego (TM) advent calendar — opening each numbered door in turn to extract a fishy treat. If that doesn’t soften the hardest hearts to the joys of the season, I cannot guess what would. 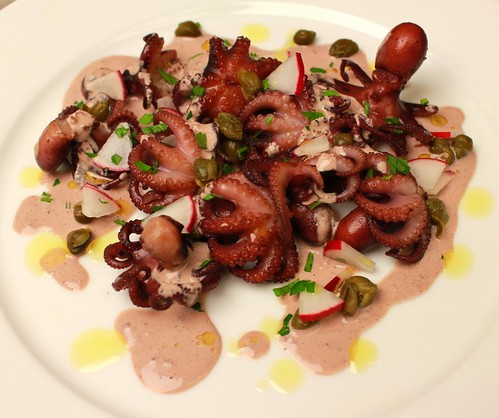 In our own, rather typical, perversion of this headline-grabbing stunt, we resolved to select an octopus to eat every day this Adventide. Sadly, we couldn’t find the time to perfect our soon-to-be-patented invertebrate-themed Advent calendar, but we did recently harvest a bevvy of baby octopus for the Peruvian classic dish Pulpo al Olivo, octopus in olive sauce.

Pulpo al olivo is another fascinating outcome of the wonderful fusion between the magnificent bounty of Peruvian seafood and Japanese immigration to that country, which we must thank for a variety of other seminal dishes including the ceviche-like tiradito. Like those more famous preparations, as little as possible is done to the fish by way of cooking, and providing you have a blender and a few basic kitchen staples, there is nothing in pulpo al olivo that even the worst cook could find intimidating.

In fact, as you’ll no doubt have already surmised, this dish has nothing whatsoever to do with Christmas apart from a very tenuous link to aquarium-based prognosticators. However, like invertebrate fans across Europe, we feel strongly that somehow shoehorning an octopus into your festivities adds a certain enigmatic quality, so we encourage you to consider dashing out for some at the last-minute. It would certainly make for a palate-tingling contrast to the richer, heavier and more traditional repasts.

For the olive sauce

8 thoughts on “All I Want for Christmas is… Baby Octopus”