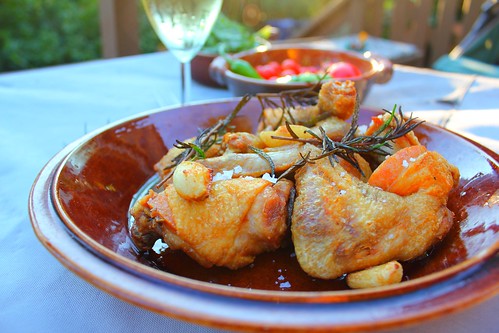 An old joke tells of a Philadelphia area man who, panicking when his doctor diagnosed him with incurable cancer and predicted he had six months to live, begged the medic for help. “Isn’t there any way I can live for longer?”, he asked. “Go marry an Italian girl from South Philly and those six months will feel like a lifetime.” the doctor replied.

During our short family vacation to Vermont earlier this summer, this sort black humor came to mind more than once.

Those of you with children, and those who know be-childrened families, will intuitively understand that going anywhere with young ones, even to the end of the driveway, requires an extensive process of pocket-stuffing so that iron rations of juice and snacks plus at least one diaper and a petite menagerie of dinosaurs are to hand in preparation for the most likely eventualities. So it was that after no fewer than three week’s pre-planning and a minimum for three hours of packing, the car was rammed to the gunwales with everything that we could need on our four-day adventure. To the roof, a self-assemble crib was strapped with patriotically-striped bungies. Amongst the assorted suitcases, Minnie Mouses, velociraptors and micro-scooters in the trunk lay a camping stove and six small propane tanks, three small saucepans, a set of cutlery, a cruet of olive oil, salt, pepper and vinegar, and last, but certainly not least, the cyclopean eyes of 4 large rolls of kitchen towels poked out from the clutter. 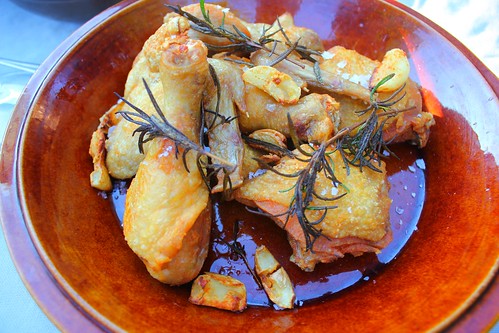 Our destination, some occasionally excruciating seven hours distant, was a rambling old guesthouse in the charming mountain hamlet of West Dover, Vermont, in the process of restoration by a friend’s uncle. Tucked away among towering maples on the side of a hill, hidden from the road up a bumpy graveled track and brambled on all sides with wild raspberries and blackberries, it bore a definite Ann of Green Gables air. In its partially-finished condition, with at least 12 bedrooms and a confusing tangle of staircases from which labyrinth we would emerge expecting to meet David Bowie all sharp-fanged and languid perched on a stool, it was a wonderful old pile for the kids to explore. And explore they did. Roving in packs with our host’s giant hound, Bubba, in tow, their screams fading and growing louder as they rumbled around its echoing hallways, happily avoiding the exposed ends of rusty nails and splintering planks, they would return dusty and cobwebbed, full of excitement about the discovery of another secret stairway or bewitched by some peculiar Indian dolls with melted faces.

The fascination and excitement lasted right up until meal-times when the lack of a kitchen, occasioned by an electrical fire in late spring, laid bare our rudimentary accommodations, and made clear why Amy had taken such pains to prepare. Without the camping stove, I do not know how we would have managed to feed four hungry children unless they ate bread and peanut butter for three meals a day. And, I, whose camping experiences, both cooking and sleeping (I’ll save one episode in particular for a later post), range from the absurd to the just mostly uncomfortable, was relieved to discover that not only was this particular model perfectly suited to turning out sausages, chicken legs, pork chops and corn for the under-8s, but that the whole experience was rather enjoyable despite the continual squatting that singed my knee-hairs and exposed my groin to the full force of the burners. 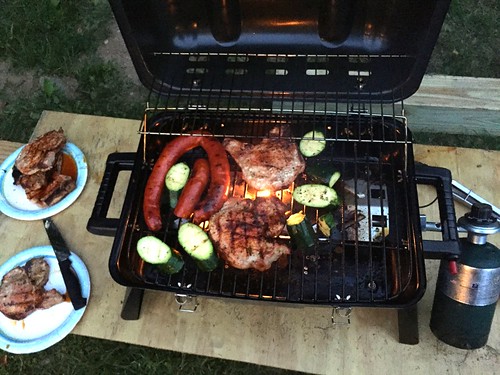 However, encouraged by my praise for said stove, Amy’s attempts the following morning to turn the several pounds of blueberries we picked at the delightful Boyd Family Farm into pancakes topped with local maple syrup revealed its limitations. And what on a conventional stove would have been a 30-minute stint, turned inexorably into more than an hour as the batter sat gloopily in the pan uncooked while the plastic handle of the pan began to melt releasing cancerous whiffs of petrochemicals into the pristine mountain air.

Even this frustrating episode though was lightened the day after, when during our final breakfast together taken at Dot’s of Dover, we were surprised at having to request maple syrup in place of the Aunt Jemima’s on our table. It felt like being offered a Big Mac in a Paris bistro. 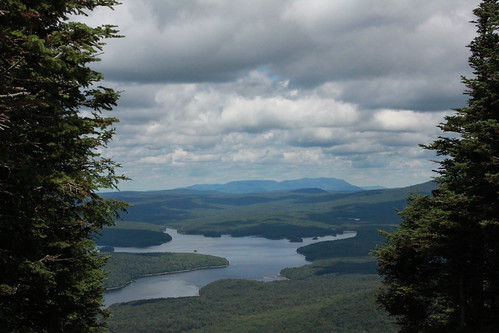 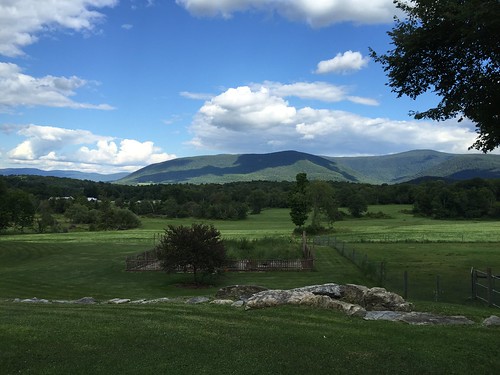 Upon our return home, wearily putting ourselves to bed and scratching our heads at the realization of being more tired after our vacation than before it, we promised ourselves two things: a trip away without the kids err long, and, before that, a decent meal. We have not yet planned the trip without the kids, though we have pulled a few old guidebooks off the shelves which now sit unopened on our coffee-table soon to be fully covered with lego, Elmos and other furry toys, and overall levels of fatigue have reduced our ambitions for a decent meal from one with exotic ingredients to one that’s ready before 9pm.

But happily, lowered expectations meant that a simple dish of Spanish-style garlic fried chicken scented with rosemary and served with a lip-smacking white wine jus and a few vegetables from the garden fit the bill. The crispy, salty skin of the young chicken and the chewy exterior of the fried garlic yielding gently to a soft and almost sweet center offered a mental break and the promise of somewhere relaxing and far away that even the prospect of a 6am start the next day could not destroy. 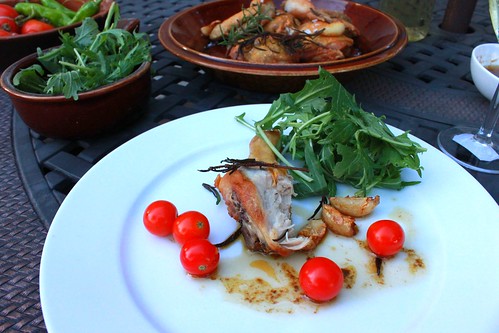 9 thoughts on “This Just In: A Break Not As Good As A Rest”