Most of us would agree that the things we have made ourselves tend to be the things that we are most proud of. For example, in spite of the fact – or perhaps because of it – that their flaws are plain for all to see, I am inordinately proud of the pair of raised beds that I literally cobbled together using leftover paving stones and a couple of bags of cement. In this case, my pride stems both from the fact that it was quite the labor of love to complete and that I made abundant use of what was to hand.

Filled with satisfaction were the long moments I sat in admiration of my inexpensively-assembled raised beds. Their free-form stylings, which architecture critics may generously describe as vernacular, were particularly gratifying, speaking more of how I had solved for geometric inconsistencies than of my gracelessness as a mason. Beautiful or not, they were of little use without the addition of some pricey high-grade potting mix. And, upon being presented with the prospect of lugging 6 cubic yards of damp organic soil around, I instantly became less chuffed with my creation. But in the long run, after a little spine-realignment, this was no matter, and it has since become a joy. Its solid construction hints that may be forever.

Every spring, we plant a variety of comestibles that have always ended up on our plates. The three strawberry plants we originally invested in are not just a source of juicy delight for our kids in June, they now threaten to choke the whole bed, surrounding borders and all. And the lovage plant I put in two years ago after learning about its celery-on-steroids flavors from New Scandinavian Cooking‘s Andreas Viestad, now reaches 9 feet tall and such is its pungency that it can only be used an inch at a time.

My raised bed isn’t our first foray into vegetable gardening. Back when we lived in a smoggy, particulate-rich corner of Brooklyn, NY, in a god-forsaken triangle between two major highways and a canal that is now an EPA superfund site, we were so desperate to somehow green our environment that we threw caution to the wind and planted tomatoes, eggplant, peppers, cabbages and a variety of herbs amid the broken concrete of our awful back yard. The peculiar Stockholm syndrome common among New Yorkers fairly much obliging us to do so out of ludicrous gratitude for access to even the meanest and most preposterously meager outdoor space. Hang the very real risks from ingesting of mercury, lead, VOCs and PCBs.

Perhaps forged, Sauron-like, by these dark forces within the earth, everything grew with a spectral abandon. The eggplants were of particular note, being both perfectly-formed and numerous. So much so, that by late-August of that summer, we had exhausted our, admittedly slim, repertoire of eggplant dishes, and had become sick of the sight of these inky, bulbous orbs. At the time, we made a preposterous batch of baingan bharta – a creamy, curried dish – during which we learned a cardinal rule of eggplant cookery: always pierce before baking. The muffled “booms” coming from our grill foreshadowing much scraping of burned-on debris. 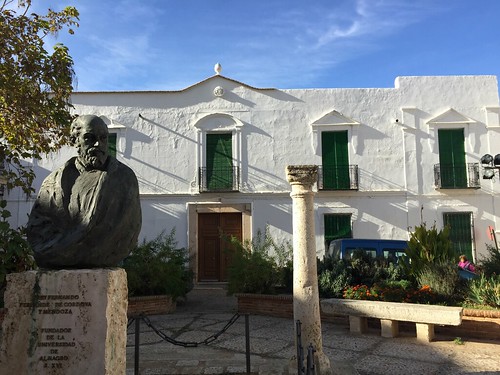 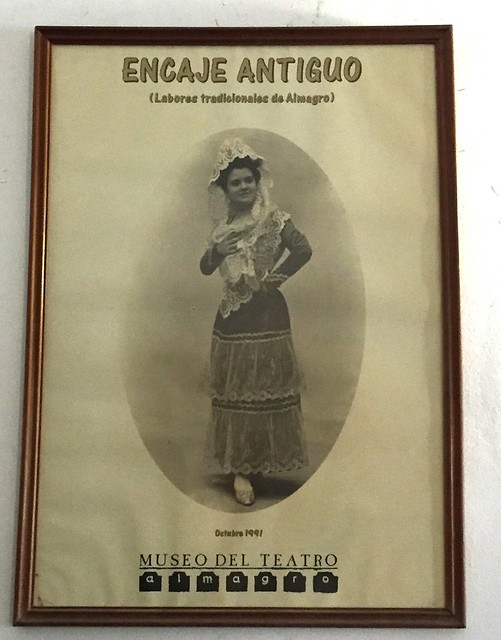 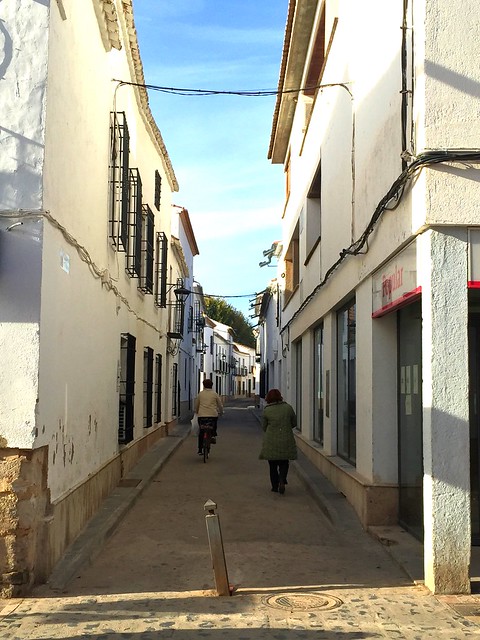 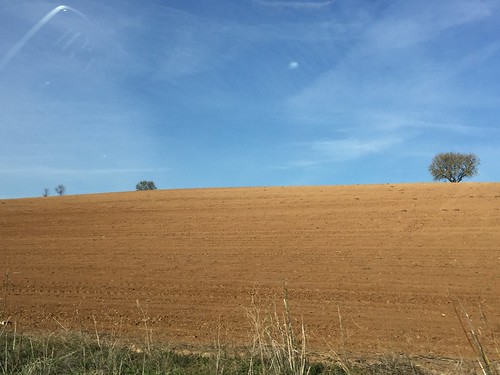 This was all before we visited Almagro where the preservation of the town’s famous eggplant is considered an art second only in importance to the making of traditional lace. In the half hour it took for us to stroll across town – from stubbly wheat field to stubbly wheat field – it occurred to me that having two such comparatively niche products as her primary economic mainstays must have had a limiting effect on Almagro’s growth.

However, and perhaps strangely given that they are a preserve, the lifespan of an Almagro-style eggplant is tantalizingly ephemeral. Many are the tapas bars throughout Castilla-La Mancha and as far north as Madrid in which the anticipation of the new season’s bounty is feverish. But after a few short weeks between August and mid-October, they are gone. We found none, literally none, by mid-November, and evinced only puzzled Castilian faces when we inquired about their availability.

Driving out of Almagro past files of knee-high bush vines aflame with the last of their autumnal robes, our empty, eggplant-less bellies a-grumble, it was difficult to imagine the green, vinious tangles necessary to produce even such tiny baby eggplant as she is famous for amid this parchedness. In Arabic, Al-Mansha, from which La Mancha derives its name, means land without water, suggesting optimism on behalf of farmers aiming to grow anything but straggly weeds or stunted wheat. Indeed, such might be the reason for their size and scarcity – not to mention the prices a plate of Almagro-style eggplant can demand. But somehow, every year, in this austere environment, Almagro’s farmers manage to coax these peculiar delicacies from the rusty earth. Whether this is testament to the willingness of the eggplant to grow regardless of the soil and climactic factors, I am uncertain.

Sadly, more than a year since our visit, we find ourselves once again out of eggplant season. Fortunately for us, but perhaps not you, we were far-sighted enough to make ourselves a couple of batches in August that we’re still digging into now. (The demand for pickled nightshades at our house not yet rivaling that of central Spain.) A recent Friday night tapas event showcased them cheek-by-jowl with other La Mancha favorites manchego and venison morcilla. Interestingly, they were not as good as when they were first made – another reason perhaps why they figuratively fly off the shelves each year. They weren’t as crisp, the flesh had a softer, less pleasing texture, and the color greyer, more muted than their lavender hue when first jarred.

You shouldn’t be completely deterred from trying this one though. While the tiny green and white Thai eggplant are ideal for this preparation, the smallest Japanese eggplant you can find will work nicely, as they did for us. And should even they be beyond your reach, the recipe can be amended to get the best out of the everyday rotund, shiny grocery store eggplant, if handled carefully, and not over-boiled, in large part because no matter how beautiful they start out, once cooked, all eggplant lose their vibrant color and look a bit sulky. Do note though, that the bigger the eggplant, the woolier the texture so we’d recommend testing one or two as you go to figure out when to take them out of the water so they don’t get soggy. Even so, so lip-smacking is pickling marinade that it can make up for a myriad of sins. 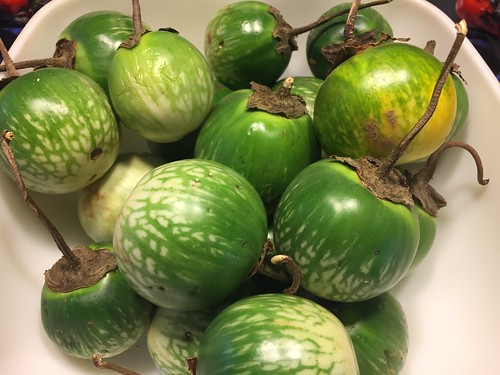 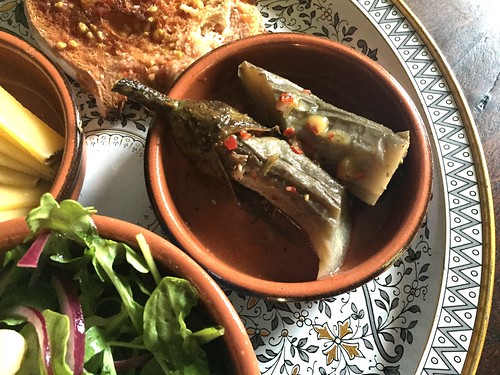 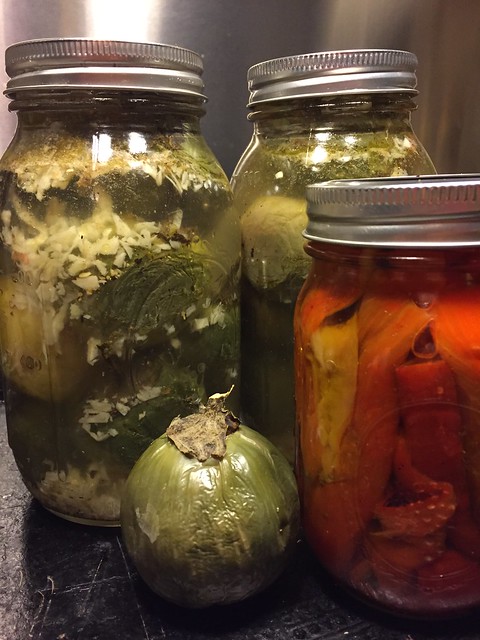 Almagro-Style Pickled Eggplant
(produces 6-8 servings for tapas, 3-4 raciones)
Adapted from Penelope Casas’ The Foods & Wines of Spain and our good friend Miriam Garcia at The Winter Guest/Invita do Invierno

7 thoughts on “Pick a Peck of Pickled… Eggplant”