“The beauty of Jerusalem in its landscape can be compared with that of Toledo.”
– Robert Byron, The Road to Oxiana

Perched above its bend in the Tagus, with sheer drops on three sides to eddying currents, and tightly-enclosed within its craggy walls Toledo has an impenetrable, monumental aspect. But, through the early morning rays, as the mists rise off the river and mingle with the low sun, her peach-colored sandstone ripens and softens, refreshing and renewing this ancient city in its parched plain.

Upon our arrival the previous evening in the wondrous gloaming, and stumbling down its steep and winding alleys — so narrow as to render the pair of us laden with luggage an obstacle for even the slimmest oncoming pedestrian — the crepuscular light and looming shadows created an entirely opposite effect, one of brooding mystery and dark secrets. I can only liken it to a labyrinth, which when viewed from the outside might appear perfect and logical, but inside proves bewildering. 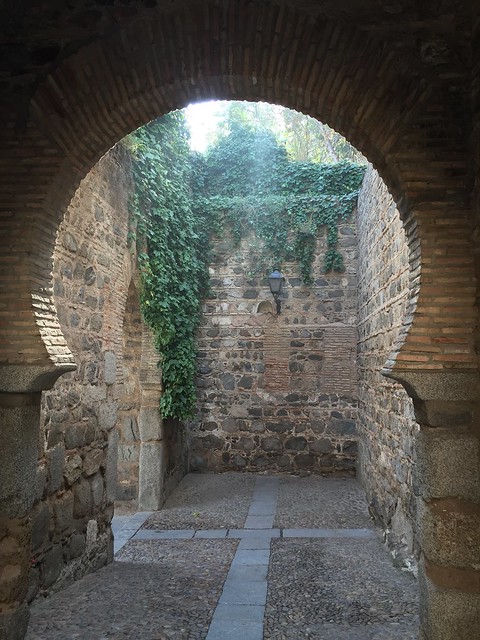 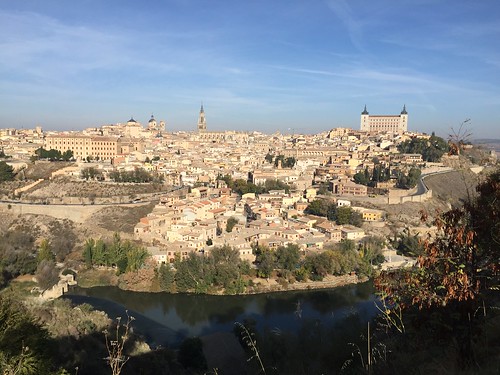 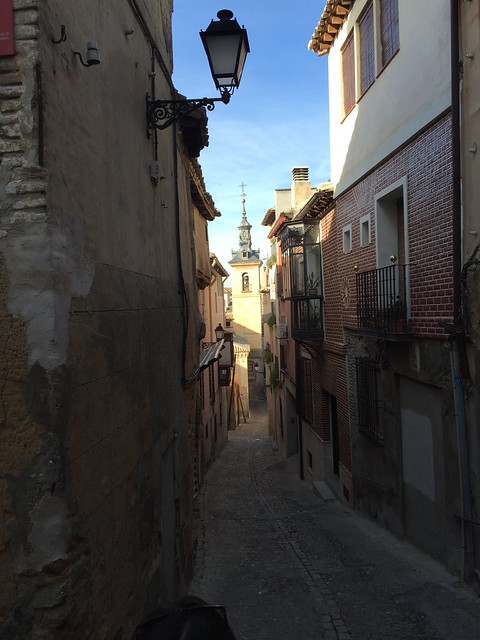 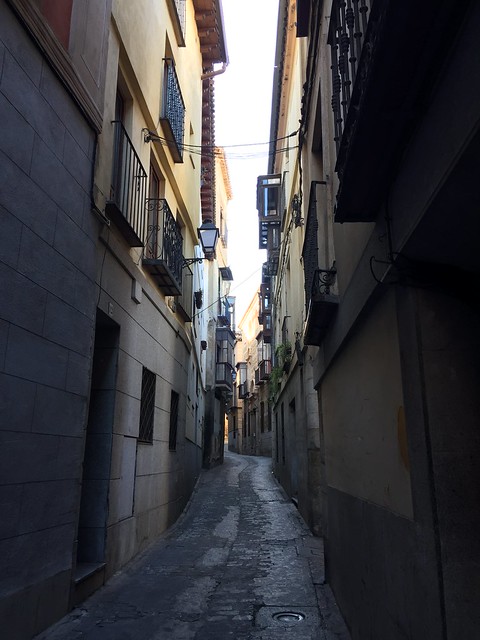 And what a labyrinth it is! A tiny and maddeningly-constructed maze the like of which fiendish school boys create in matchboxes to confound trapped ants. Though shown as main thoroughfares on maps, even its largest streets are barely wide enough to permit the passage of the smallest model Fiat, and so serpentine and branching are they that one can think oneself on the right track only to realize a few minutes later that not only is one lost, but one is in an entirely different sector of the city.

A half hour walk in as straight a line as Toledo permits would take you from the Puerta de Toledo to the old Moorish gate, Puerta de Bisagra, on the opposite side of the city, and yet, one can walk the city for hours without even glimpsing so much as the city ramparts let alone catching sight of the river. The almost organic forms of her alleys evoke the decorative aspects of some of the surviving Moorish architecture in this former city of three religions. And it would not surprise me in the least to find that researchers have discovered obscure messages to the divine in the sinuous scrawl of Arabic inscribed in Toledo’s street plan.

Following a brief tour of Toledo’s massive cathedral – reeking of incense and festooned with shriveled relics – we sought perspective, descending the steep, eastern side of the city, walking from morning sun into foggy umbra as we went. Across the Puente de Alcantara, we began scaling the short hill below the Castillo de San Servando, former redoubt of the secretive Knights Templar. In the cool air, we surveyed a scene thousands of years in the making: river, rock and the syncretic workings of generations piled on top. It was one of those rare mornings of absolute peace when the body is loose and the mind asks no questions. The world felt like a triumph, and, for a moment, all ours. The susurrating Tagus rushed over the weir below whispering of the occult in these ancient stones, but it was lost forever when a party of chattering septuagenarian Chinese tourists unloaded from their bus in front of us. We turned on our heels, and returned to the river.

Fishermen garbed in lovat green waterproofs emerged on the banks around the ruins of the Roman bridge as the mists rose, and, as we watched, Toledo took shape before us. Again, our appreciation was fleeting as over our shoulders came the bleating tour guide and the shuffle of sensible shoes. Back across the sandstone flags of the bridge we fled and up onto the city ramparts seeking haven in Toledo’s maze. Up and up we climbed until we found ourselves just below the Plaza de Zocodover, the only real open area within the old city.

To avoid being accosted by ticket-sellers for the egregiously bright red “tourist train” parked at the edge of the square, we did our very best to behave like Toledans and quickly ducked inside a butcher’s. Carniceria Charcuteria Juan Antonio Ortega de Mora was the perfect choice. Stocked-full of meats which no-one but the locals would either countenance nor know what to do with, we found the proprietor in expansive mood and eager to discuss his wares. Following treatises on the methods by which deer blood sausages are fabricated — gruesomely illustrated with his thick, blood-stained fingers — and the beauty of the hills in which the animals are shot, Juan Antonio moved onto his array of preserved game birds. He described the careful extraction of buckshot from the unfortunate quails and partridges mimicking the use of tiny tweezers, and then, with repeated air-kisses, their preservation with local herbs and vinegar. We learned a great deal, or, at least enough to be convinced to splurge on ten feet of assorted sausages and several kilos of game birds in escabeche. 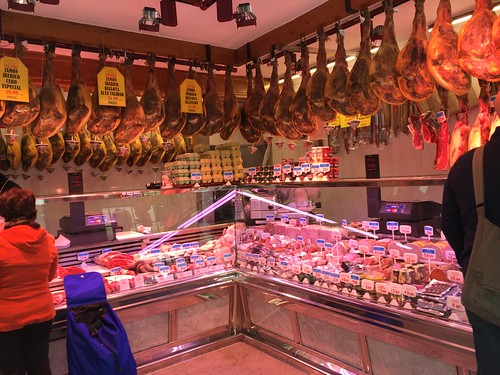 Feeling that our purchases were a useful disguise, we entered a tanner’s shop trying to maintain the pretense of being locals. The pungent smell of freshly-dyed hides hung thick in the air, punctuated by the straining tones of Moroccan radio and the guttural rasps of Arabic from the attendant on his phone. Feeling as if our disguises weren’t very good after some far too easy haggling, we emerged blinking into the sunlight some minutes later sporting new bags that, foolishly, weren’t large enough to accommodate our charcuterie.

So, with clanking tins banging into our knees we wandered on, downhill in search of Cristo de la Luz, a former mosque. Taking a wrong turn, we wound up at a primary school outside which a crowd of parents were waiting to collect their kids for lunch. I couldn’t tell if the winsome glances of one lion-maned mother were directed at me or the bounty of preserved game I was hauling. The laughter of the home-bound children at the lunch bell echoed off the cobblestones in sonorous peels, disturbing a flutter of pigeons among the chimney pots.

Being lost in Toledo is both easy and charming. Losing the snap-happy crowds, even in such a small place, is chief among those charms. Indeed, so tightly packed is Toledo that we walked past the tiny former mosque twice without realizing it, noticing it and the fact that it was closed for lunch only on our third pass. Understanding that before learning how to command nature one must first learn to obey it, we took that as our cue for midday repast, repairing to the narrow confines of Restaurant-Cerveceria Dragos for a delicious couple of hours. 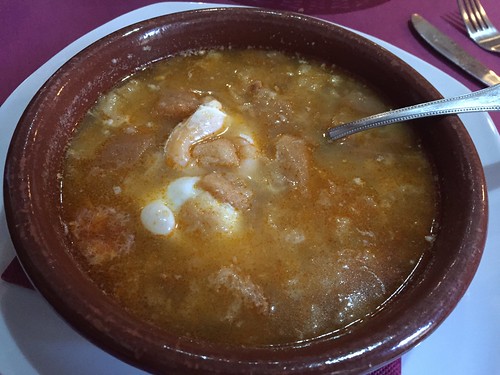 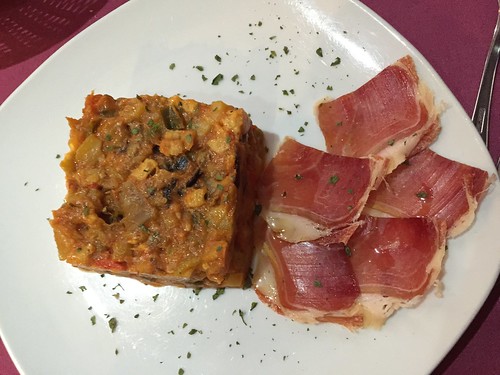 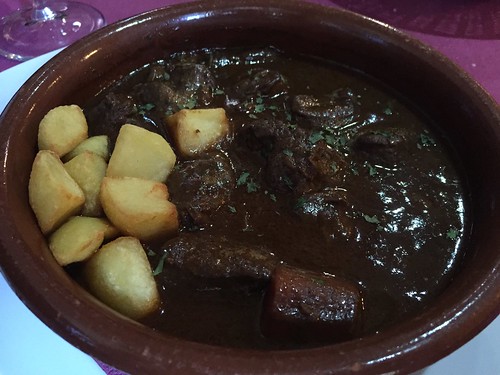 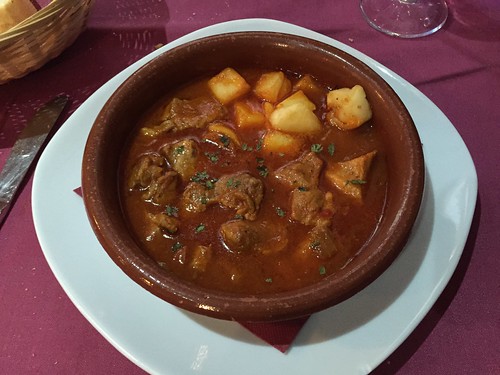 Part of La Mancha yet with its own specialties based on its unique Christian, Moorish and Jewish origins, the cuisine of Toledo is a diverse tableau. Our lunch combined regional classics — the pimentón-spiked egg and bread broth Castilian soup and vinegary eggplant salad pisto Manchego to begin — with uniquely Toledano mains — deer in chocolate sauce and the fantastically-titled carcamusas, a long-simmered pork stew with a thick sauce of tomatoes, garlic and peppers. Fittingly, we shared the dining room with an Israeli family of Sephardic heritage on a quest to connect with their ancestry. Challenged by the pork-laden menu, our pigeon Spanish proved useful. Their contentment at the seemingly meager ration of egg salad and lentil soup we helped them order put our own gluttony to shame.

Returning to the medieval era, and, in spite of the haram contents of our guts, entered the Mezquita Cristo de la Luz. Despite having had an annex added by the conquering Christians in the late 15th century, it remains barely large enough to accommodate a handful of visitors among its slender pillars. Worship must have been a truly malodorous affair in those pre-reconquest days as the unwashed and barefoot faithful knelt toward Mecca cheek by jowl. But, its neat, geometrical gardens, overlooking the Puerta del Sol and facing the rising sun, full of appropriately diminutive cats, pouncing on one another from behind screens of lavender and bay, provided an airy retreat. 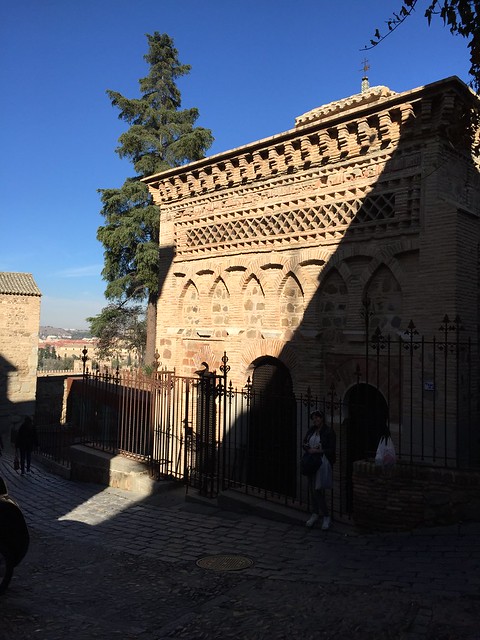 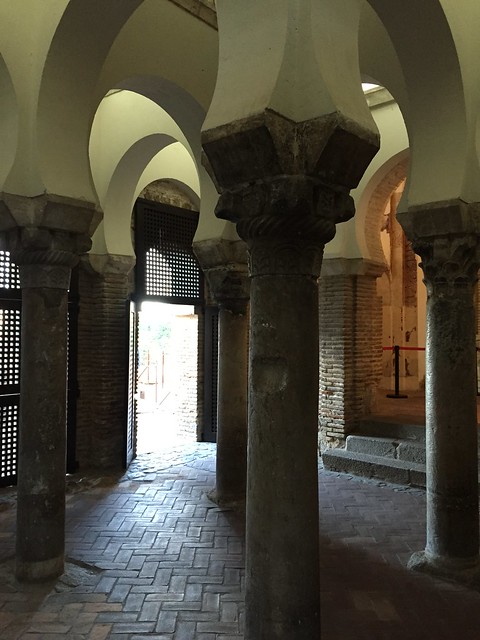 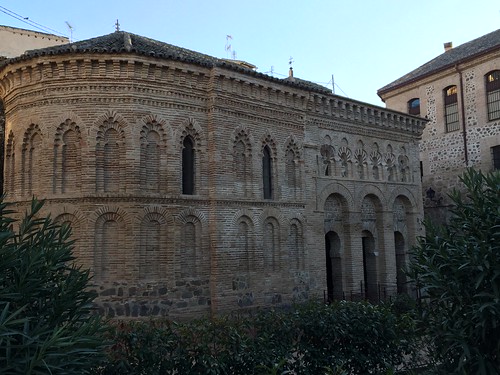 If Toledo is known outside of Spain for anything other than spawning a fairly dismal namesake in Ohio, it is for the painting of El Greco. Perhaps the single most important influence on the art movements of the 20th century, the works of El Greco are virtually synonymous with Toledo. His landscape View of Toledo is said to have influenced Van Gogh’s Starry Night, and his Opening of the Fifth Seal, depicting a scene from the Book of Revelation, can be seen in Picasso’s Les Demoiselles d’Avignon. But unlike these two, his most famous work is actually still in Toledo and on view to the public for only 2 euros in the entrance to the beautiful Iglesia de Santo Tomé, provided you can elbow your way to the front. The Burial of the Count of Orgaz depicts the ascension into heaven of Don Gonzalo Ruiz. In a curiously reflexive scenario of art imitating life, Toledo native Ruiz posthumously received his title of Count for bequeathing funds for the enlargement and adornment of Santo Tomé, some of which were paid to El Greco for painting the scene in the chapel of the Virgin of the church two centuries later. The work is famous principally for the incredible series of portraits that it contains, including a selfie by El Greco. Our appreciation of El Greco’s brilliance would have been heightened had we not had to engage in a shoving match against the bustling Chinese tour group just to get a peak at it. 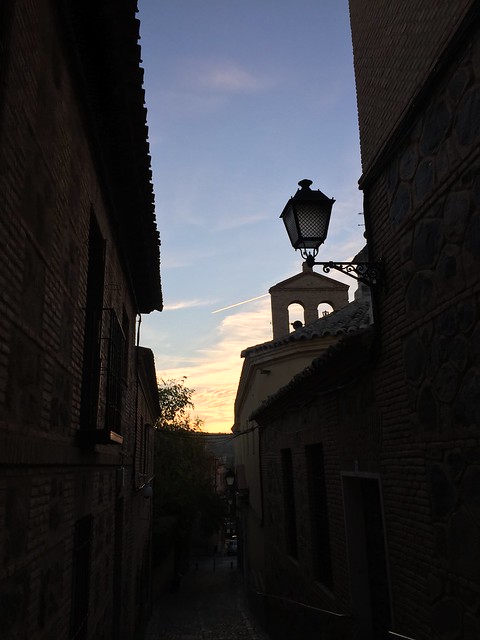 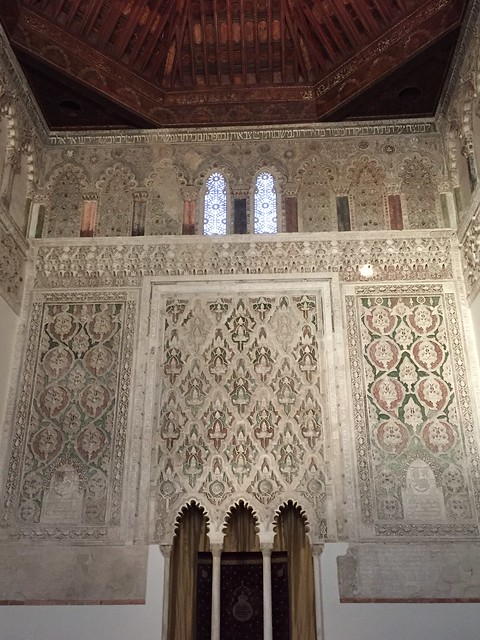 As the shadows lengthened we strode towards the dipping sun, downhill in the direction of the Puerto de Bisagra and Toledo’s historic former Jewish quarter. As we continued, the streets became narrower, a series of chicanes funneling us past jewelers, souvenir stalls and antique dealers, their assorted bric-a-brac tumbling into the street making it resemble an obstacle course with the sun in our eyes. We entered the Sinagogo del Transito, Toledo’s largest synagogue as the sun was hitting the front of building square on, flooding the temple with orange light and illuminating its rich decorative stucco combining Hebrew and Arabic scripts in colorful floral motifs. Its magnificent interior is said to rival the intricate splendor of its contemporary the palace of the Alhambra in Granada. In spite of this, from the women’s gallery close to the great oak paneled ceiling, the synagogue felt empty and somehow sterile, as museums often do. But there was a sensation that the pause button had been pressed, and that at any moment it could resume its duty as a house of worship to Toledo’s industrious and learned Jewish congregation should they re-appear.

That evening over vermouth and olives at a trendy after work spot I read about a TV show Cees Nooteboom quotes in his Roads to Santiago which stated that Spain misses its former Jewish communities – that were expelled and scattered to the wind after the reconquest – and would gladly invite them to return home again. If Toledo is any guide, parts of their former homes appear ready to receive them tomorrow, though if that were to happen, Toledo’s restaurateurs would need to adjust their menus.

24 thoughts on “Holy Toledo: Still a City of Three Religions”