Barcelona’s La Boqueria is perhaps the most famous food market in the world, and the most famous of its bar/restaurants is undoubtedly Pinotxo (pee-not-cho), run by the equally famous Juanito Bayen. His immaculate sense of dress and reputation for treating his guests like family have made him and his 14-stool establishment legendary. Indeed, such is his generous spirit that many are the tales of him spontaneously breaking open magnums of pink cava at 11am and passing glasses around. Everyone in the know food-wise, it seems, has made a bee-line for his place when passing through Barcelona on their way to other notable establishments like El Celler de Can Roca and Albert Adria’s Bodega 1900. Everyone, that is, except us. In fact, during our visit to Barcelona, we didn’t even make it to La Boqueria, in spite of staying about three hundred yards away down Las Ramblas, and we must have walked past it more than a few times as we explored the city.

If this makes us bad foodies, then that’s something we’re going to have to live with until such a time as finances and children allow us to return. To be fair, the same is also true of London’s storied Borough Market. Although in its case, I was a resident of London for three years so the circumstances are less extenuating. That is, unless one considers it within the context of the absolute penury which living in London in my early twenties reduced me to. As such, my unwillingness to put myself through the anguish of gawping at a sea of unattainable comestibles as I jangled hard-earned coppers in my threadbare pockets may be understood. 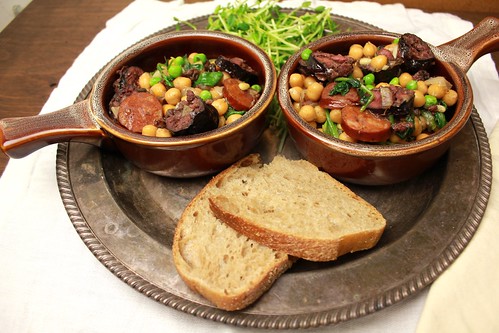 Almost as famous as Bayen’s bowtie and broad smile are the impeccable Catalan dishes turned out of a kitchen no larger than a shower stall by his nephew Albert Asin. Taking inspiration from the bounty available on the surrounding market stalls, Asin’s cooking takes advantage of La Boqueria’s world-class produce and seafood: red prawns a la plancha from Palamos dusted with sel de Guerande, soupy rice dishes from Catalunya’s lower camp near Tarragona jam-packed with bosky wild mushrooms or delicate cigalas, and, in winter, a stunning dish of crumbled butifarra negra, black sausage, with chick peas in the Catalan style.

We may not have visited La Boqueria or any of the other aforementioned restaurants during our visit but we did make sure to consume our fair share of butifarra, both white and black, so it was that when we spied a recipe from Pinotxo while reviewing the new book Charcuteria – The Soul of Spain it seemed an appropriate way of making up for having missed out on Pinotxo during our visit.

The dish, as we made it — and it should be noted that we used Jeffrey Weiss’ recipe more as an inspiration than a recipe — is more or less a quick stove-top stew since we took the liberty of using canned chickpeas rather than dried, used a Portuguese morcilla we had brought back from Montreal and added two chorizos to the ingredient list. Eaten in the early spring, with wintry sausage and beans rubbing shoulders with young, fresh peas and watercress, it was as good on a cool, rainy day as the bright, warm one that followed. With the contrast of the black sausage, the sandy chickpeas, the auburn chorizo, and the emerald peas; the variety of textures, and the minerality and sweetness of the morcilla — it’s a whole lot packed into a single dish, reflecting perfectly Asin’s tiny kitchen and Pinotxo’s elbow-to-elbow conviviality. 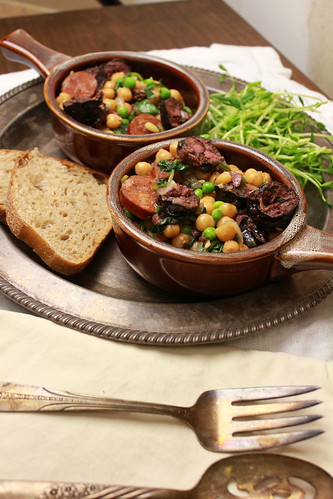 Note: butifarra negra is more similar to a French boudin noir than to a typical Spanish morcilla in that it can be crumbled on account of it containing diced pork colored/flavored with blood rather than predominantly blood coagulated around grains. If you have butifarra type sausage then by all means crumble it rather than slicing the morcilla as we did. And depending on the texture of your morcilla, we would recommend cooking it separately first before slicing otherwise it may well just fall apart.

9 thoughts on “Blood In the Time of Spring”