Last year there was unprecedented outrage when the news broke that the meatballs being sold by more than one European grocery chain were “contaminated” with horse meat. This was big news this side of the Atlantic for two main reasons: a) the horses in question are likely to have been American horses, and b) because eating horses is disgusting and unfathomably cruel. Animal loving organizations, like the one I used to work for, were up in arms, seething at the abject slaughter of our mighty chargers by those filthy, snaggle-toothed Europeans. After all, what truly civilized country would consider carving up their noble steeds when there are so many dumber, slower and less attractive creatures on the farm who don’t let you ride on their backs to stick a knife into?

Of course, that is only half the story. The other half being that most of the unfortunate equines who made it into Ikea Swedish meatballs weren’t farmed for food in the first place. No, they were of no less noble parentage than some of North America’s most esteemed racing blood-stock, who, during their short and tortured careers, were pumped full of the equine veterinarian’s favorite cocktail of steroids and antibiotics before being sold for slaughter to Mexican and Canadian abattoirs. So much so, in fact, that those with a rather more omnivorous approach to life, even unwittingly, were warned against eating them lest we suddenly sprout manes, start galloping spontaneously or develop a penchant for oats. Whether or not it is more humane to send raced-out or lame horses to the glue factory than the butchers, I leave to the ethicists among you, but suffice it to say that I believe that whatever ends up in the human food chain should be regulated on behalf of the consumer’s health. If that also coincides with the animal’s health and well-being, so much the better.

It’s widely acknowledged that the consumption of horses is one of the major divides between Anglophone and Francophone Canadians, the latter having no more compunction about putting Mister Ed to the sword than their co-linguists in France. So, last summer, flaunting the general ethical code of my then-employer and knowing the biological risks, we purchased a scant pound of horse meat during our stay in Montreal -that it was 30% off may have reflected the incipient consumer anxiety at its provenance. As regular readers may know, we ate with vigor and with almost unparalleled appetite on that trip, and so were unable to consume it north of the border. But, so determined were we to taste horse flesh, we decided to risk approbation from the Department of Homeland Security and smuggle it back in alongside a bevy of Middle Eastern condiments and spices taken from the shelves of the very wonderful Marché Adonis. After a few nervous moments at the Vermont border as our trunk was inspected by a suspicious customs official, we drove home and secreted said contraband in our freezer. 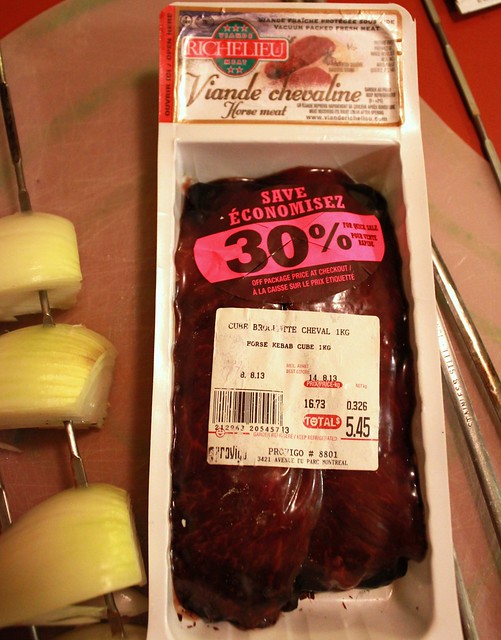 Six months later, having almost forgotten about it, and during a late winter clear-out, we came across it and decided we should, ahem, get back on the horse. Armed with a jar of za’atar and a flat-top griddle, we seasoned said chunks of dark, purplish horse, skewered them, and seared them on high. Five or six minutes later, we were enjoying the minerally, iron-rich flavor of pink-centered horse kebabs stuffed inside warmed pita and slathered with tzatziki and grilled vegetables. For contrast, we also skewered some beef rib eye chunks. It’s remarkable how lean the horse was by comparison – thanks, perhaps, to its racing pedigree – and how clean and ungamey the flavor. If I had to place it, I would put it somewhere between beef and lamb in the strength of its taste, but very much further towards venison in texture and lack of richness. It was good, but not so good that I would rush out and get some more, were it available, but good enough that I would certainly try it again.

This was about a month ago, and during the interim we have neither found ourselves jumping fences nor neighing uncontrollably, so we’re fairly certain that the limited quantity we ingested had no immediate detrimental consequences. Of course, should you wish to chew on an old nag, unless you’re consuming contaminated meatballs or happen to know an unscrupulous vet, finding horse meat this side of the 49th parallel is going to be tough. That said, our neighbors both North and South, are far more liberated in their choice of protein, and should you find yourself in Europe, Central Asia or parts of South America, horse is also comparatively easy to find. 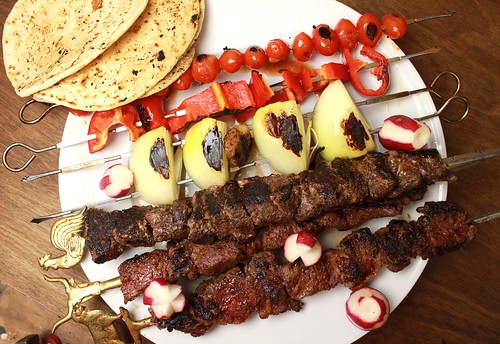 As for us, like boy scouts in the quest for an arm full of patches, now that we’ve crossed this one off our list, we’re already mentally moving down the equidae family tree, having recently found a recipe for donkey stew in a Puglian cookbook…