I have never known an aroma quite like it before: an intense, aromatic perfume. We could smell it from miles away – even before we had passed the last of the strip centers and construction sites. On one side, the low khaki scrub of the sandmine, on the other the hot, itchy pine forests, then suddenly, line after line of dark green citrus trees, all jolly with bright orbs, flicked past as we advanced into what locals refer to as “old Florida”.

Momentarily, as we turned onto a compressed white sand road, the foul odor of roadkill turkey vulture stung our nostrils before the sweet, lively scent of orange blossom returned. Dust from our tires wafted over a small herd of goats chewing pensively at the fence and a few sleepy Angus cattle grazing among thorn bushes. Then, pulling into a graveled driveway, we spied a tumble-down tin shed bedecked with old signs and a chubby basset hound dozing in the shade of a grapefruit tree.

“You guys been here before?” asked a throaty voice from behind a grey mustache as we emerged from the car. “No, it’s our first time.” “Ah, okay. Sorry, thought I recognized you, but all white people look the same to me.” He has the look of D.B. Cooper forty years on. A thin, grizzled face topped with a tattered baseball cap, scowling eyes hidden behind dark aviators, and a purplish-red nose, half-sunburned, half boozed. 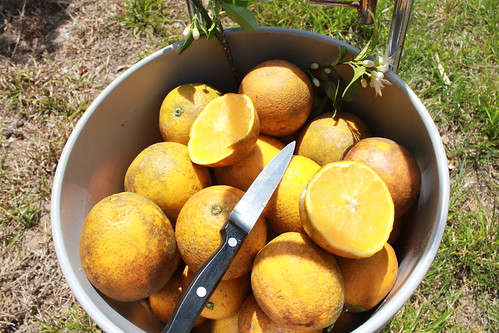 “It’s near the end of the season, but there’s still plenty to go at. Anything from mid-green to bright yellow’s what you’re looking for. By the way, you brought a knife, right?” “No, sir.” “Nobody carries a knife anymore! Lyndon Johnson always carried a pocket-knife. He was a real president, not like this O-Sama character we got now.”

“Anyways, here’s the knife. Oh, and watch out for fire ants. You know what to do if you see them, right?” “No, sir.” “Walk quietly away. That’s what you do. You don’t wanna wake up the whole anthill.” “Oh, okay. Thanks for the warning. Are there a lot of them here?” “Sure there are. A lotta farms don’t have ants anymore because they spray their trees and it kills all the insects. We’re 100% organic. Always have been – for thirty years, always will be. That’s why we have this great orange blossom honey – because we haven’t poisoned our bees. Most farmers are too lazy nowadays to be organic. Lazy as Puerto Ricans, damnit.”

Armed with two large five gallon buckets on wheels and a pocket-knife, and our three-year-old brandishing a four foot pole topped with a pirate-like hook, we advanced into the orange grove only to be called back. “Watch out for the alligator too.” “Wait, what? There’s a real alligator in your grove?” “Sure is, but don’t worry he won’t eat nothing bigger than a small dog.”

Happily, we neither saw nor heard any alligators, only buzzing bees, ants busily going about their business and a few snow-white ibises, perched atop fenceposts, their curved pink beaks like long noses, nostrils a-quiver at the orange perfume. Indeed, there was plenty of fruit left on, so much that in less than an hour – in which we and our three year old had both eaten our fair share – we had collected 10 gallons. Without the knife and hook, we might have struggled. Valencia oranges hold tightly to their trees and, unless tugged firmly or twisted until their stem frays, prove harder than you’d expect to pick. 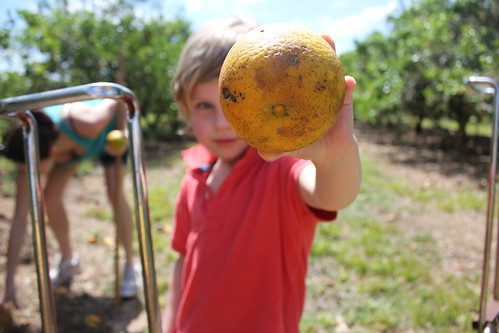 Returning to the shed to have our pickings weighed, we paused at a rusty sink to rinse our sticky hands. “You guys take medicines, you know, like pharmaceuticals”? the farmer asked us. “Not unless we get sick.” “Well, I never have and never will. I just take a spoon full of this orange blossom honey whenever I feel like I’m getting sick. Brings me right, every time.” 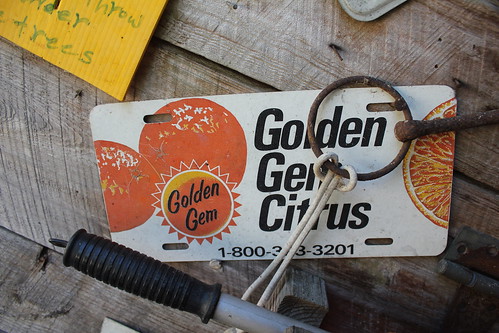 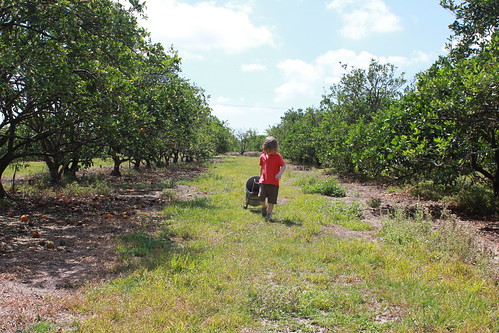 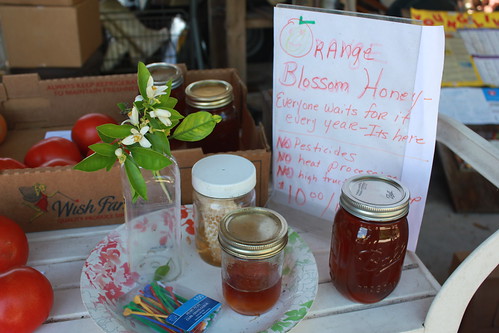 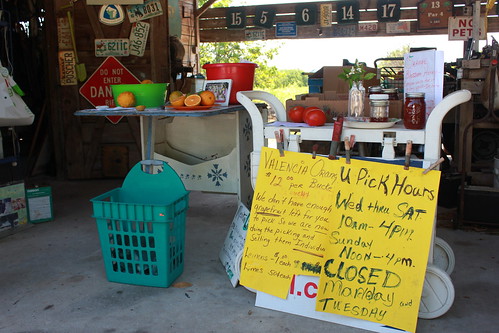 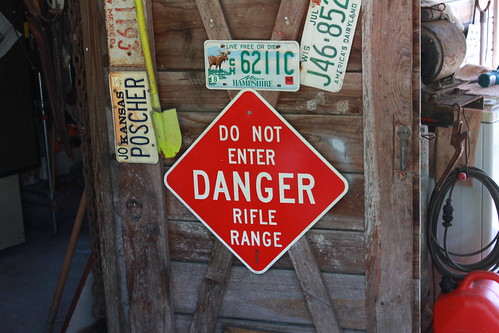 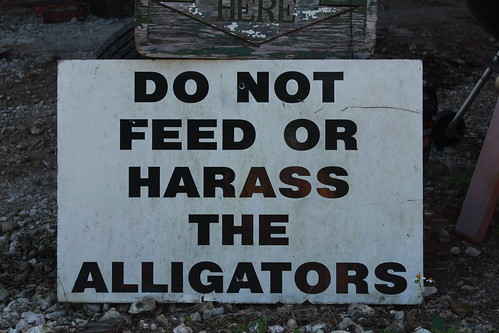 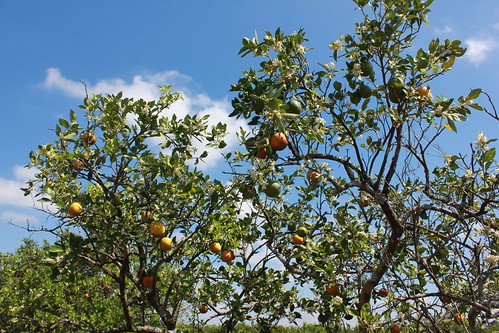 As we climbed back in the car, in the backseat Paolo’s smiling sticky face, replete with dried orange juice runnels, was illuminated by the boxes of shining citrus all around him. From his lawn-chair in the shade, the citrus farmer waved and advised us, “Those oranges will keep for months. Store them somewhere cool and dark and you’ll be havin’ fresh juice ’til summer.” Much of our bounty didn’t last another 24 hours, and for the remainder of our stay, we gorged ourselves on freshly squeezed orange juice like scurvied seamen back on land. Glass upon glass at breakfast, like drinking sunshine, straining the pulp and seeds out through our teeth. In the evenings, my father-in-law fashioned mighty orange margaritas as we sat around the pool listening to the sounds of the warm Florida night, delighted to have escaped to this from the bitterness of the incipient winter.

Still, try as we might, ten gallons of oranges was too much to get through, so we secreted as many as we could carry in our suitcases. Rather than store them in our basement, we juiced them this past weekend. Standing sipping at a sunny window, even with eyes closed, it was hard to imagine ourselves back there, but looking out, we smiled at the faintest stirrings of spring – violet crocuses and a pale halo of yellow around the forsythia.

Husband and wife farmers Bob and Judy Johnson bought their 10 acres of land as a winter vacation home in 1979. Owners of a plant nursery in central Michigan, their original intent was to grow pines or other sale-able plants for homeowners, but decided on citrus when they overheard vacationers at a fruit stand talking about how great it would to pick their own oranges. Thirty-five years later, during which time they have nurtured every one of their trees from seed, they now have a heady mix of Valencia and Arizona sweet oranges, tangerines, and grapefruit.

Their farm, the imaginatively titled, U-Pick Citrus, is one of the few self-pick operations remaining in South Florida, where most of the smaller farmers have sold out to developers allowing gated communities and golf courses to proliferate. In spite of the lack of competition, it’s still not exactly busy. Even in peak season, there are only 10-15 visitors per day. If Bob and Judy are out, you can still pick and leave your payment in a box, but it would be a shame to miss out on Bob’s irascible, but enjoyably coarse demeanor.

Update April 2017
Bob and Judy recently found a buyer for their farm after it had been on the market for three years. Happily, the buying couple intend to keep it as a working citrus grove, open to the public, and will be guided through taking the reins by Bob himself. Until late spring next year, Bob and Judy will still be there helping out. After that, they’ll officially retire and the new owners will be in full control.