Oaxaca, in southern Mexico, has the highest proportion of native peoples in the country, and traditional culture is alive to such an extent that an estimated 50% of indigenous people are unable to speak Spanish. The state’s unique geography and multiple climatic zones have allowed pre-Columbian practices to persist largely undisturbed into the modern day making it a veritable living ark both for biodiversity and for those wanting to understand Mexico prior to the arrival of the Spanish.

In fact, so ancient are Oaxacan traditions, that it is believed to be among the oldest continually inhabited areas of the Americas with archeological evidence suggesting the first peoples may have arrived around 11,000 BC. More recently, Monte Alban, an enormous citadel built by the Zapotecs, until it was overrun by the neighboring Mixtecs, was once home to 25,000 people, and among Mexico’s largest pre-Columbian cities. These two remain Oaxaca’s largest ethnic groups, and the traditional diet of the region still closely resembles that of their pre-colonial forebears in its reliance on corn, beans, chocolate, chiles, insects and wild game.

Yes, it is here in the wild hills and deep valleys of Oaxaca that intrepid foodies go to gorge on piles of shiny, comal-toasted grasshoppers (chapulines) seasoned with garlic, lime juice and salt containing extract of agave worms or dusted with chile powder. However, there are rather more conventionally-toothsome victuals native to Oaxaca that can be enjoyed without any initial revulsion. These include more than 200 recipes for mole, tlayudas (a sort of flat-bread topped with melted Oaxacan cheese), and all manner of tropical fruits. Indeed, apart from its eponymous cheese, Oaxacan cuisine is considered by many in the know to be among the “purest” forms of MesoAmerican cooking because it has incorporated so few European ingredients. 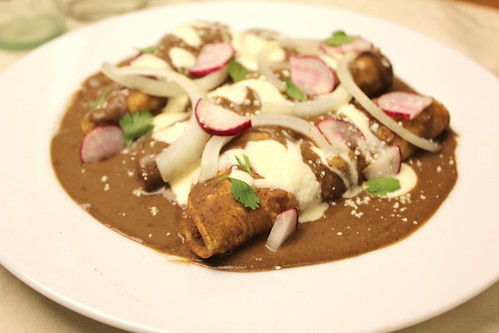 For most people, mole is the thick, gloopy stuff they know from their local Mexican restaurant that usually comes slathered over a pile of folded, cheese-stuffed tortillas or as a heavy-handed condiment to a lump of chicken or turkey breast. In Oaxaca, where the sauce originates, it comes in at least seven common varieties ranging in colors from black to yellow, and may include up to forty different ingredients, and, however it is served, it is the sauce not the protein that predominates the dish. Happily for us, and indeed you, there are more approachable dishes in the Oaxacan canon for the humble home cook to attempt. Among them is perhaps one of Oaxaca’s most common breakfast foods: enfrijoladas, which to the uninitiated, or easily fooled, may appear, on the plate, at least, to resemble a black mole.

Meaning literally “in beans” or “beaned”, enfrijoladas are a cousin of the better-known enchiladas – in which some form of protein is wrapped in tortillas that have been first fried and then dipped into a chile sauce. (American versions come topped with an immoderate serving of grated cheese, but this is completely non-traditional, and as with mole, it is the sauce that really makes an authentic enchilada.) Indeed, as with mole, Oaxacan enfrijoladas have a wonderful complexity from the dark, velvety sauce. 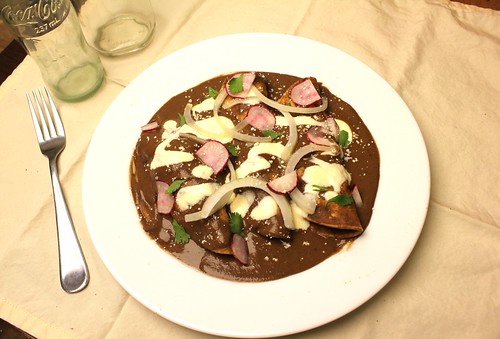 Black beans, a Oaxacan staple, are stewed with garlic, Mexican chorizo (not traditionally), avocado leaves, and/or hoja santa, creating an intoxicating mix of flavors culminating in an ineffable perfume of anise, and a faint bitterness. When served over tortillas stuffed with fresh cheese or squash blossoms, or even shredded chicken or pork, and topped with Mexican crema, white onion rings and, since it’s typically a breakfast dish, a fried egg, a dish of enfrijoladas leaves you surprised that something so extraordinary could be made from something as base as a can of black beans.

Other regions of Mexico have their own versions of enfrijoladas in which different bean varieties are used, and the same basic preparation is followed, so you may find red or even brown enfrijoladas from time to time. We did not follow the traditional method for Oaxacan enfrijoladas strictly, but of all the beans we’ve tried, black beans create the silkiest sauce, not to mention offering the most beautiful outcome with its binary contrast of black and white.

8 thoughts on “Enfrijoladas! Where Have You Bean All My Life?”