Sicily sits apart from mainland Italy, like a rock ready to receive a swift kick from the instep of the Italian boot. Indeed, many Italians would tell you that this is precisely what the unruly, volcanic island needs. Throughout its diverse and textured history, Sicily has always been set apart somehow, having been in turn either at the very center of things or at their very periphery. Perhaps this wild oscillation of stature has had as much of an influence on the outlook and behavior of the Sicilians, their dialects and cuisine, as the people and cultures that have passed through the island over the past two and half millennia.

An enduring legacy of these historical ups and downs and comings and goings is the widely known phenomenon of disagreement: ask two Sicilians a question and you’ll get at least three conflicting opinions, regardless of subject. It is possible that in this lie the origins of the island’s infamous culture of vendetta but, as we’ve previously noted – in relation to the composition of one of the island’s most famous pasta dishes, intense disagreement also present at the Sicilian table. It was little surprise then, to find a similar level of antipathy between recipes for aneletti alla Palermitana.

Palermo, is Sicily’s capital and largest city, and has an international reputation as a locus for street food showcasing the best of the island’s portable comestibles. The swordfish spiedini, various fried seafoods, stewed spleen rolls and chickpea fritter sandwiches, are as much of the stuff of gastronomic legend as they are grist for the mill of tourists’ gruesome tales of questionable hygiene and subsequent gasping squitters. However, Palermo also has its very own set of dishes meant for the table, among them pork chops (cotolette) dusted with breadcrumbs and capers before being fried, and whole fish (often orata, sea bream), baked and served, alla Palermitana, with capers, olives, tomatoes and lemon. The ratios in this latter dish and indeed whether it is baked vs grilled and served with a sauce of the vegetables or simply sprinkled with uncooked vegetables is a matter of much debate. The same is true of aneletti alla Palermitana and its close cousin aneletti al forno.

Unlike its alla Palermitana compadres, these dishes don’t call for capers or olives or lemon, what is uniquely Palermitana here is the aneletti, a pasta only found in and around Palermo. There is at least basic agreement that the dishes should contain a meat sauce, aneletti pasta and peas, but that’s more or less where the concorde ends. (We should note, parenthetically, that there are versions for mid-summer and mid-winter, in which most of the estival versions sub salami for ground meat). Most recipes call for eggplant, some eschew it; some insist on three kinds of melting cheese (any of provola, caciocavallo, scamorza, primosale and fontinella), which may or may not be mixed in with the sauce and pasta depending on who’s nonna made it, others only one; some decree that it must be formed into a timbale (often wrapped in strips of eggplant) and served in slices like a cake at room temperature, others that it be topped with breadcrumbs and served gooey from a baking dish. 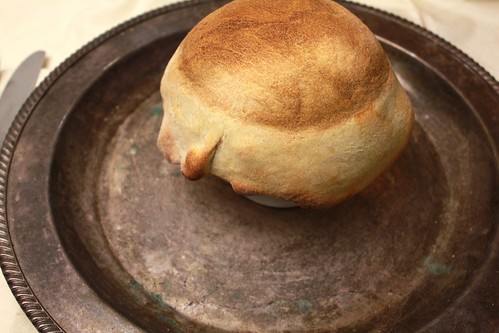 Not having enjoyed the dish in Sicily yet, the only version of the dish we’ve eaten – at Cacio e Vino restaurant in New York City – doesn’t match any of those we can find on the interwebs, and could well be their imaginative, chef-y take on the variety of preparations. Preferring not to mix the cheese and, instead, place it on the bottom of the baking dish and avoiding eggplant, Cacio e Vino tops theirs with a buttered hat of pizza dough that bakes to a chewy crust, resembling a beret, as the cheese melts inside.

Aneletti, also written anelletti, (meaning “little rings”) are a traditional Sicilian style of flat, circle-shaped pasta, just about big enough to wear on the tip of your pinky finger, not unlike the uber-generic spaghetti-o, in fact. Strangely, given how much fun they are to eat, and that similarity, they aren’t exactly easy to find in the US even in specialty Italian grocers and online. We first made this dish a couple of years ago while we lived in Brooklyn and, having come up short after searching high and low for them in as many Italian stores as that borough has, we ordered some aneletti online. I say some, but we were unable to buy fewer than a 10lb box, and have been working our way through them ever since.

So it was recently, that when doing a mite of pantry spring cleaning, we unearthed our remaining 8lbs and, as coincidences go, also happened to have a pound of Sunday gravy in the freezer and some pizza dough leftover from the season’s first pizzas on the grill, it seemed a propitious moment to get all Sicilian on our respective a$$es. 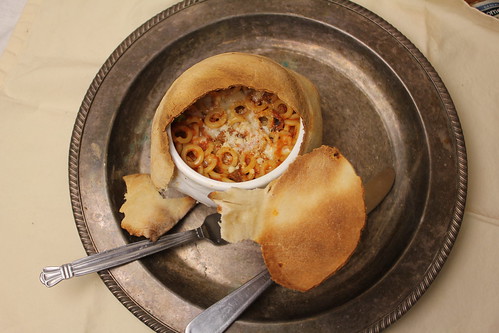 Sure enough, while we all wiped out plates clean with the last scraps of the pizza dough, general, mostly non-violent, disagreement broke out over whether our version would have been better with eggplant and/or breadcrumbs, and whether our choice of caciocavallo over the more highly smoked scamorza was the right decision, and if not, whether that would have improved or obscured the overall flavor. Happily, we’ve still got 7lbs of aneletti left with which to work through most of the remaining untried combinations.