The destiny of nations depends upon the manner in which they are fed.”
– Jean-Anthelme Brillat-Savarin The basic premise of William Alexander’s recent book, 52 Loaves, like his first title The $64 Tomato, is that the author becomes so obsessed with a particular project, in this case creating (and growing wheat for) the perfect loaf of country bread, that he devotes a year (hence the title) and a great deal of energy and money, in the pursuit of his goal.

I’ll leave aside the obvious shades of mid-life crisis that dominate the book’s context, and I’ll ignore the far-too-frequent-for-comfort discussions of Alexander’s marital relations that I feel like he included to appear less of a nerd than a bread-obsessed IT director might otherwise, and focus instead on the fact that, as with many quests, his journey ultimately became more important than his goal. Alexander’s aim may have been to master the art of baking au levain country loaves at home, but in the course of his year-long peregrinations across North America, and to Morocco and France, and wittily transcending his middle-aged, obsessive-compulsive suburban dad identity, he finds much more than a faultless bread recipe, becoming a fount of fascinating knowledge and experience about life and human history.

Many of us, I’m sure, secretly dream of jacking in our workaday lives in the urban rat-race and retiring to a country town to bake delicious breads (or insert artisan career of choice), but Alexander disabuses the reader of this romantic notion through his own strenuous baking experiences as a boulanger for forty monks at the Norman abbey of St. Wandrille. Certainly, hobbyist bread bakers can learn a great deal from the author’s efforts, and benefit from the distilled information he provides in the form of recipes in the appendices, but for me, the most interesting aspect of 52 Loaves is that it raised a thorny issue Michael Steinberger also makes in his recent book Au Revoir to All That, that I was reading concurrently, namely that in France, the country many of us believe to be ground-zero for all that is good in bread baking (not to mention gastronomy in general), there is hardly a decent loaf to be found. 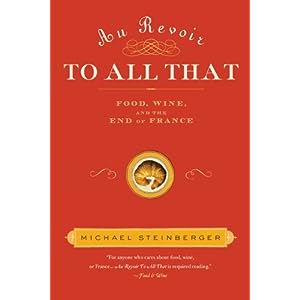 Projecting his theory that a 1,300 year old abbey must be the place to find (and make) artisan country breads, Alexander finds, to his dismay, that not only do none of the monks know how to bake but that even obtaining the correct kind of flour and yeast is nigh-on impossible. Echoing a  situation Steinberger also laments, Alexander questions how things got this way as he finds himself smuggling pots of his wild yeast starter into France when traditionally all the knowledge and great products have been coming the other way.

Of course, recently the French have become a convenient punchline in America for all manner of jokes about their military prowess, supposed lack of backbone and preference for industrial action over actual hard work, and one might be forgiven for thinking Steinberger is cashing in on that incipient anti-Gallic sentiment to herald the demise of the only areas in which the French have typically led the Anglo-Saxon world: food, wine, and artisanal production thereof. In fact, Steinberger is a self-declared Francophile whose enviably thorough research at many of the finest tables, markets, farms and vineyards in France must have caused him terrible distress as he found that a disastrous combination of a poor economy, confounding government regulations and a saddening disregard for traditional French food culture have led to a serious decline in gastronomic excellence.

Alexander notes the irony of  an American computer guy teaching French monks how to bake bread, and Steinberger points to the French Culinary Institute’s 2006 Gala hosted by a bevy of Spanish chefs and not a single Frenchman as evidence of the “end of France”, but it is, all the same, hard to believe that an entire nation’s cultural identity is vanishing to such an extent that hobbyist Americans and a little competition from a resurgent southern neighbor have supplanted centuries of tradition. Indeed, one of the underlying biases of both books is that we in America (and Britain), who have recently emerged from a centuries-long gastronomic Dark Age and have finally embraced the notion that food coming from small, craft producers is better in myriad ways than that of the industrial conglomerate (something we owe in no small measure to our Gallic cousins), are somehow now able to preach this message back to the French and that the joke is on them.

Certainly, Steinberger’s book is persuasive and raises legitimate concerns about how government regulation of cheese making is precipitating the extinction of some of France’s most famous lait cru, or raw milk, cheeses, but I can’t help averring that those who live in glass houses should not throw stones. While USDA regulations still rule out the importing of French raw milk cheeses, not to mention actively discouraging domestic production thereof, there is comparatively little hope of their persistence here or there. Moreover, if it is the attraction of McDonald’s and Wonderbread that is behind the decline in traditional French bistrots and artisanal country loaf baking, then who is to blame – the country who popularized both and, now, finding itself now saturated and obese  as a result, is looking to export them to maintain share prices, or lower middle-class French families struggling to make ends meet in a global economic downturn?

If there is a message to be taken combined from both titles it is perhaps an obvious one, that wherever one finds oneself (to a greater or lesser degree depending on location), and whether it be haute cuisine, organic wheat flour or artisanal raw milk cheese, fine food remains a bourgeois passion really only available to those whose considerable purchasing power offers the option to choose. Evidently, a world where delicious, nutritious, locally-grown and organic foods are available to all is the ideal and a goal worth striving for, but until, through government intervention or other means, and especially problematic in a persistently bad economy, these food stuffs are price competitive with the products of industrial agro-business, it is too early to start congratulating ourselves for having seen the light and pointing out the fault in others in the grip of lower-grade processed foods.

Au Revoir to All That:
Food, Wine, and the End of France
by Michael Steinberger, Bloomsbury USA, New York, NY, 2010

9 thoughts on “Book Reviews: 52 Loaves by William Alexander and Au Revoir to All That by Michael Steinberger”