“Maybe later we get togezza and drink som schnapps, ja?” wasn’t exactly the invitation I most felt like accepting that morning. A few moments later, I pushed off from the chair-lift, crossed my ski-tips and fell face-first into the snow.

Arms crumpled beneath me and poles poking painfully into my ribs, I lay there for several moments stunned, unable to move. It was only after wriggling my hands free from the straps and pushing myself to my knees did I notice the crimson stain decorating the dent where my face had been.

Turning to gather my strewn equipment and dab my bleeding lip, I could see the graphite lake and chocolate-box town of Zell am Zee sitting silently amid frosted conifers 1,000 meters below. Only a few wisps of smoke indicated anyone was stirring.

That I had been able to lie there and gather my wits without legion other skiers stacking up on top of me as they exited the lift was testament to the hour and the day. It was shortly after 9.00am on New Year’s Day. I and my schnapps proffering friend were the only people on the mountain. And I, and perhaps she, was still drunk from the night before.

Evidently, while it was no aid to my athletic performance, being drunk at that hour did have its advantages. For example, had I been sober, my swiftly swelling face and bruised ribs might have preoccupied me and prevented me from admiring the singular beauty and icy silence of the deserted mountain. Similarly, had I remained ensconced under comfy blankets in the room I was sharing with my dad, he would almost certainly have happened upon the half-packet of cigarettes that had spilled out of my coat pocket as I staggered into bed only a few hours earlier, prompting a difficult conversation. Another one.

Such a moment would have begun the New Year in the same vein as the last several since my mother’s death: emotionally maladroit conversations interspersed with awkward silences. Youthful ignorance and overwhelming sadness on my part, multiplied by my father’s complete inability to express himself and my sister’s abortive, though well-intentioned, efforts to assume the maternal role had made family gatherings all but unbearable. A family trip had been proposed as curative. And, while the cozy environs of an Austrian ski-lodge – roaring fire within, snow piled up to frosted windows, foot-long icicles hanging from the low eves without – might sound like the perfect place to express warm, empathetic feelings, the enterprise was destined for failure the moment it had been given breath.

Had we been an altogether different sort of family – tighter knit, more commiserative – it very well could have worked, and, indeed, may never have been necessary. As it was, the opportunity to spend some time consoling and reconnecting with one another after a period in which the trauma of bereavement was followed by us all moving apart was sorely needed. Sadly, all it did was painfully highlight the hole her absence had left in our family, and how she had left each of us among people we barely knew and were ill-equipped to relate to.

At some point, I will apologize to my father for my part in those awful years. I must also apologize for dragging him all the way to Austria for his first skiing experience at aged 56. It must have been truly godawful for him, but he bravely took himself off to ski-school each day, persevering with it even after one of his big toe nails turned black and fell off due to a poorly fitted boot.

He very kindly paid for us all too – myself, my sister and her boyfriend at the time – and we just took to the slopes leaving him to fend for himself among a group of strangers half his age. I can hardly wait for the shattering moment when my own children exhibit the same utterly callous insensitivity to me in whatever form it may take.

Guarded by the self-absorption and ignorance of my 23 years, I scarcely gave a thought to how terrifying it must have been for him to stand at the top of even the gentlest bunny slope and feel so completely out of control. From the vantage point of 16 years more maturity, I can’t say that I would have the stones – uncomfortable and cold in brand-new ski-gear and pinching boots, face tightly a-grimace and teeth clenched – to face it down. Especially day after day.

Fair enough, give it the good old college try on day one, but struggling out of bed the second morning with swollen toes and aching muscles, berating my children and myself for giving in to their whims… well then, I can definitely see myself opting for the hot tub followed by a bar with a view, unless the two could be somehow combined. Mind you, the morning he and his class were due to go up the adjacent glacier he did look a bit pale. His stoicism momentarily cracked when I blithely remarked, as the TV monitor in our shared room showed, that it was -26C up there.

The only day that we did all come together and actually enjoy ourselves was later on that New Year’s Day. I, fresh off the slopes, with dried runnels of blood on my chin, a developing black-eye and now in full hangover misery, my dad, sister and boyfriend nicely rested and without facial injury, met for a late lunch at a hut halfway up the mountain. The difficulty in obtaining staff that day meant that the menu was limited to three dishes, none of which my vegetarian sister would countenance, but all of which were sweet nectar in my rumpled condition: goulash soup, cordon bleu, and braised wild boar stew.

While I clumsily stuffed an enormous helping of goulash between my cracked lips, my father showed unusual gastronomic interest in his cordon bleu and my sister poked gingerly at a side of fries sprinkled with hot paprika. Unsurprisingly, I was the butt of family jokes about my face and my alcoholic appetites, but took it in the playful spirit it was intended. We sat that there contentedly for at least a couple of hours, even having a schnapps to settle our stomachs, as thoughts of heading out on to the slopes became vague memories. I can vividly remember my father’s nose wrinkle in horror as he introduced it to the schnapps, but, as with the skiing, he gamely allowed us to convince him to give it a go, “For medicinal purposes then…”, he agreed.

That New Year’s Day in Zell, with full tummies, a roaring fire, icicles dripping slowly on to piles of glistening snow, is among my favorite family memories, including before our numbers were reduced. It’s entirely possible that we have never passed a more peaceable hour together since, even though the three of us have all married. Being the family that we are, I have never asked whether anyone else remembers it and, if they do, whether it carried any meaning for them. But for me, it was a fleeting memory of how we happy we used to be. 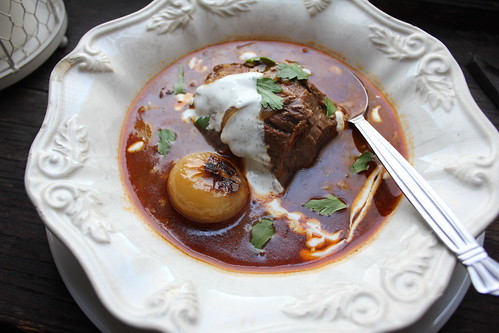 Note: traditionally, goulash is served quite soupily, not in the thicker stew-like form, we’re most familiar with. As with most such ubiquitous dishes, there is considerable difference in opinion as to what’s right and wrong, but on a couple of things the recipes of all purists agree: there should be no tomatoes or tomato paste, no peppers (except pickled as a garnish) and no wine. Few call for garlic either, but since that seemed positively acrimonious, the below is highly redolent of the perfumed rose, and reminiscent of the restorative goulash I ate that day in Austria. And, lest you suggest that Hungarians have the monopoly on goulash, I might remind you that the two were halves of the same country for more than 50 years and Austrians feel great ownership of this famous dish that is equally at home in the central alps as on the shores of Lake Balaton.

* Note: in British parlance, “going on the lash” means heading out with the intention of becoming roaringly drunk.